Faye Valentine is the deuteragonist in the anime and manga series Cowboy Bebop. She is a wanted criminal who joined the Bebop crew after crossing paths with them twice. Although appearing to be no more than 23 years old, Faye is actually around 77 years old, having been put into cryogenic freeze after a space shuttle accident, where in she spent 54 years in suspended animation.

She is often seen with a cigarette and in a revealing outfit complete with bright yellow hot pants and a matching, revealing top (and, on occasion, a bikini). She sports violet hair, green eyes, and a voluptuous body. Unsurprisingly, many of the men she encounters consider her attractive.

Spike describes Faye as a woman with an attitude. She is a brash, egotistical and quite lazy woman, despite taking plenty of time to pamper and care for her own appearance. Faye has been arrested several times in the series, and has spent time in handcuffs on the ship. She, at times, expects the boys to take care of bounties for her, while she sits by idly to reap the benefits and eat all their food, which is another source of conflict.

Faye has an almost unstoppable attitude, and even her sometimes innocent smile can be seen as dangerous. She has many bad habits, such as drinking, habitual gambling, smoking cigarettes and occasionally cigars, becoming unnecessarily violent, and turning on partners when the profits seem too skimpy. Sarcastic and presumptuous, she rarely appears weak or in need of support. She brags and takes care of herself, never trusting others, cheating and lying her way from one day to the next. She also shows herself capable of unpredictable behavior, as when she kissed Ed on the mouth to snap Ed from one of her rambling moments.

She is a woman who is skilled at getting what she wants; her indomitable exterior hides a more delicate interior. Upon awakening from her 54-year cryogenic sleep, not only was she saddled with a massive amount of debt that she had no means to pay, but she was also diagnosed with total amnesia, a stranger in a mysterious world that she was not a part of and did not understand, surrounded by people who claimed to be helping her but were only there to take advantage of her naiveté. The surname "Valentine" was merely a name given to her by the doctor who woke her; the circumstances of her accident, her previous life, and even her real name all remain a mystery, and are only gradually revealed as the series progresses.

It has been hinted that she came from Singapore on Earth, and was the daughter of a very wealthy family, as the city's famous Merlion Statue features prominently in scenes of her childhood, and that memories and a film from her childhood showed her living in a large mansion. Faye is supposedly her real name, as a high school classmate (by now an old disabled woman) recognises her and calls her by that name. In her debut episode, she claims to be descended from Roma people, but it later becomes apparent that was likely a lie. Utterly betrayed by someone she thought she could trust after waking, Faye found herself burdened with even more money to pay, and the situation resulted in the hardening of her personality to an extreme degree. She even says in Session 11: “we deceive or we are deceived”, and that “nothing good ever happened to me when I trusted others.”

Throughout the series, though she retains her sarcastic demeanor and unpleasant nature up until the very end, it is easy to see her grow as a character. She learns to value her comrades, coming back to the Bebop when she realizes that it is the only home that she has left, naming it as the “only place I could return to”. She grows to understand the disadvantages of being a loner, and that even though her "family" is somewhat dysfunctional it is still a place where she will always belong.

Throughout the series, though she grows to care for Jet and even Edward in her own way, it is her relationship with Spike that remains a cause for consideration by most. In one episode Spike teases her and asks if she will come to help him if he gets into trouble, and though she scoffs at his remark, she eventually does. Faye even points her gun at him in a threatening gesture in the last episode, as Spike is walking away to what she and Jet both realize is his possible death, and ask why he's throwing his life away. After he leaves, Faye cries.

Seemingly little more than a thorn in her partners’ sides, Faye is actually a well-rounded member of the team. She can handle herself exceptionally well for a woman of her slight appearance, displaying at least once in the series (in "Cowboy Funk") that she has a powerful punch. Adept at flying, Faye has stood her ground just as well as Spike has in an aerial dogfight in her ship Red Tail, and at times even against Spike in an aerial dogfight (though Spike eventually proved the better pilot). She also excels with guns, and is first seen in the series completely disabling a shop with a Heckler & Koch MP5K, though she is immediately apprehended afterward. In the movie, she is seen with the same gun, in addition to her normal companion: a Glock 30. 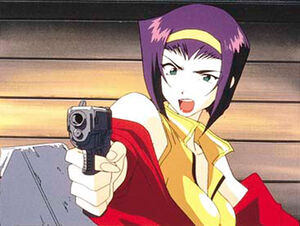 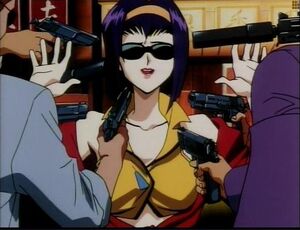 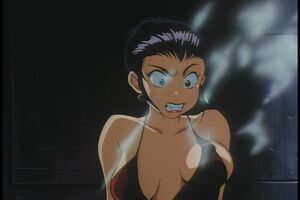 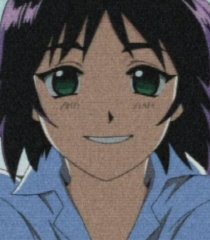 Faye as a child 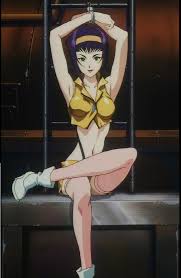 This happens a couple of times.

Faye takes a 'shower of angst' after recovering her memories 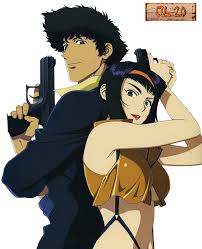 Add a photo to this gallery
Retrieved from "https://hero.fandom.com/wiki/Faye_Valentine?oldid=1915013"
Community content is available under CC-BY-SA unless otherwise noted.