Hitenryu (fictional fighting style loosely based on Wing Chun, much like Jeet Kune Do)

Kung Fu
Pyrokinesis
Performs all his own stunts

Training with his students.

Help Ryu and his friends to stop M. Bison.

Fei Long is a major character of Street Fighter series.

Fei Long is a Hong Kong action film star who began his Kung-Fu training since the age of 6. After being involved in numerous street fights, he was spotted by several movie directors and began his filmmaking career.

Following the Street Fighter II tournament, he turned down a role for a movie in Hollywood, deciding to focus more on developing his unique style of Kung-Fu dubbed Hiten Ryuu or the "Flying Heaven style." He decides to take up new movie roles in IV, but finds that mysterious accidents have occurred on the set of the movie, causing many staff members to be critically injured.

The accidents were caused by S.I.N due to the writers changing the terrorist organization depicted in the movie to a multinational corporation—fitting S.I.N's bill exactly. He enters the Street Fighter IV tournament to confront Seth.

Fei Long's theme A and B appears in Super Smash Bros. Ultimate as soundtracks, also Fei Long is a novice-ranked support spirit that increases the user's fist attacks. His spirit battle is a stamina battle against Lucario where his melee attacks have increased power on the omega form of Arena Ferox with decreased jump power. 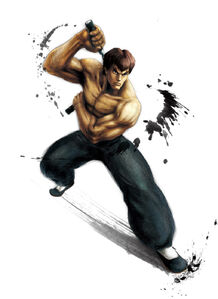 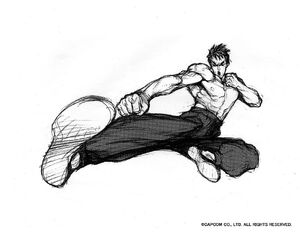 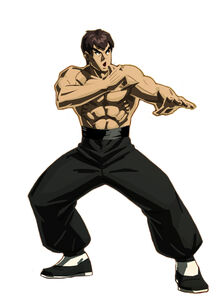 Fei Long in the promotional photo of Street Fighter V