Cleanliness (as Felix), dirtiness (as Oscar)

Alien
Felix, A.K.A. Experiment 010 (and temporarily Oscar), is an illegal genetic experiment created by Jumba Jookiba and a character in the Lilo & Stitch franchise. He is designed to clean and sterilize everything in sight. However, he had a flaw in his programming that caused him to be unable to tell the difference between dirt and living things, so he saw all living beings as giant filthy germs needing to be sterilized until Jumba temporarily reprogrammed him into a dirt freak. He was captured by Gantu, but was rescued in "Snafu".

He is voiced by Tress MacNeille in the Disney Channel series and Pete Capaldi in the fanmade series Stitch and Co.

Felix was originally obsessed with cleanliness to the point that he considered even people germs that must be "sterilized" at all costs. It is also shown that Felix has a defect that kicks in when he is faced with anything aged or antique because he doesn't understand the concept of antiques, and as far as he knows, they only collect dust.

During Felix's reprogramming, he became obsessed with dirt. The only word that 010 can say is "Dirty!"; however, as Felix, he says it disgustedly, while when upgraded to Oscar, he exclaims it happily.

Jumba appears to have found the right balance in Felix's programming. Felix is currently obsessed with cleanliness instead of only dirt, respecting antiques and recycling when appropriate. According to Jumba, he only sleeps when his stomach is full.

Felix is a small green-furred experiment resembling both an elephant and an anteater. He has a small body, a thin long tail with a brushy fuzz at the end, a large head with a long tubular elephant/vacuum-like trunk, large black eyes, small short ears, four fingers on each hand and three toes on each foot (all ending in black claws) and three dark-tipped antennae arranged in a crest-like structure.

Felix can suck up objects and dust using his anteater-like trunk/snout, sweep with his tail, and spin himself into a tornado to clean. He can also shoot lasers out of his snout, which is used to disintegrate germs and small creatures. After his reprogramming, he could release the sucked-up dirt in massive bursts.

Experiment 010 was the 10th genetic experiment created by Jumba with Hämsterviel's funding. He was designed to keep Jumba's house clean and tidy, but due to a glitch in his program, he viewed all organisms (including people) as germs that must be "sterilized" at all costs, and threw away anything even remotely dirty. 010 and the other first 624 experiments were deactivated and smuggled to Earth by Jumba during his mission to capture Experiment 626.

All of the experiment pods were released and scattered across the island of Kauai.

At an unknown point after this, Experiment 010 was activated and captured by Gantu. Due to 010's tendency to throw out anything that was even remotely filthy (including prized belongings), Gantu sent 010 to Hämsterviel, but he also found 010 annoying, and thus sent him back to Gantu, who abandoned 010.

Left with nothing else to do, 010 started cleaning up the beach until he was discovered by Lilo and Stitch, who captured him in a picnic basket and took him home. Later, Lilo brought 010, named Felix, to her school, where he tidied up the auditorium, but due to a mishap with Moses' oriental rug, Lilo and Stitch took Felix back to their house.

Felix's cleanliness proved useful at home, which fascinated Pleakley to the point that he befriended Felix until he began destroying and throwing out Lilo, Stitch, Jumba, and Pleakley's personal belongings. Eventually, Felix decided to "sterilize" Lilo's ʻohana as well and, locking them inside the house (save Pleakley, whom Felix locked outside), relentlessly pursued them until they were able to trap him in a container. Jumba then reprogrammed Felix to be less of a neat freak, but instead of just liking dirt, it caused Felix to begin making things incredibly dirty.

Lilo and Stitch later sent Felix back to Gantu as a present, but due to the experiment's new programming, rather than help Gantu clean up his ship as the latter hoped, Felix made it even dirtier. It can be presumed that Felix was sent back to Hämsterviel after this messy incident.

In "Remmy", Felix was one of the experiments in Lilo's dream.

In "Woops", Felix was sent back to Gantu after Experiment 600 caused mischief and nearly blew Hämsterviel's cover to the prison guards.

Felix reappeared in "Snafu", and was freed along with Gantu's other captive experiments by Lilo, Stitch, and several other experiments in a rescue mission.

The Origin of Stitch

Felix was one of the experiments that was gliding on the screen, but he is 602 instead of 010.

The first 624 experiments, including Felix, were rounded up by Leroy and taken to a stadium to be destroyed. However, Lilo, Stitch, Jumba, Pleakley, Reuben and Gantu arrived before the experiments could be destroyed.

It is unknown whether or not Felix participated in the following battle between the experiments and the Leroy clones.

The Leroys soon gained the upper hand in the battle, but were defeated when Lilo, Stitch, Reuben and several other experiments performed the song "Aloha ʻOe", which caused the Leroy army to shut down due to the original Leroy's fail-safe.

Felix first appeared in his own episode in the Stitch! anime where Stitch summoned him so he could get out of cleaning the house. It is shown in this episode that Felix has a defect that kicks in when he is faced with anything aged or antique. However, Felix apparently doesn't understand the concept of antiques, and as far as he knows, they only collect dust. Thus, his programming causes him to terminate anything aged in order to prevent the buildup of dust. In the end, he is reprogrammed to collect things that can be renewed and recycles them. His one true place after this is as a mobile recycling service. In the Season 1 finale "Stitch vs. Hämsterviel", Hämsterviel puts Felix along with Sparky and Angel under his control. He also appeared in "Dracula Jr.".

In Tokyo Disneyland, Felix is a popular character, being that his franchise is extremely popular in Japan. Other than Tokyo, Felix is not seen in any other park around the world.

In Tokyo Disneyland, Felix joins other Disney characters as they celebrate the magic inside everyone's hearts. 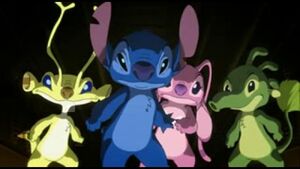 Retrieved from "https://hero.fandom.com/wiki/Felix_(Lilo_%26_Stitch)?oldid=1938124"
Community content is available under CC-BY-SA unless otherwise noted.