Defeat Professor and Rock Bottom For Stealing Magic Bag Of Tricks And Robbing The Bank (succeeded).

Felix the Cat is the titular protagonist of the animated series of the same name (dating back to 1919) - Felix has also appeared in comics, cartoons, movies and countless other media and is arguably one of the most famous fictional cats in the world.

Felix can vary from a mischievous drifter who causes trouble (but never malice) or an innocent childlike character depending on the writer and era - in all of his appearances he is shown to aid people in need, during the 50s and 60s Felix would gain his first true archenemy in the form of The Professor but also gained an ally in the form of Poindexter, during their adventures Felix would gain a few other notable enemies such as Rock Bottom, Master Cylinder and the Duke Of Zill (only seen in the Felix the Cat Movie).

It was also during this run that Felix gained a trait that stuck with him for a long time after in the form of his magic bag of tricks - which Felix could use to outsmart his enemies, this magic bag was also one of the main reasons The Professor sought Felix out so much as he was utterly obsessed with the object.

Felix is depicted as a black cat with a white muzzle, although his feet are usually black as well some cartoons had the underside of his paws as being white: one of Felix's characteristic traits is his fangs, which are often seen when he laughs (Felix's laugh is somewhat of a trademark and he does so often).

Felix is also known for surreal humor which can sometimes delve in the absurd (such as Twisted Tales Of Felix) - though he has also been depicted in a more "cutsie" fashion as well: whether he is depicted as "cute" or "dark" Felix is always a hero, even if his "dark" depictions show him as slightly more of a trickster figure. 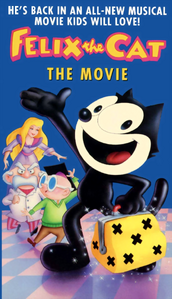 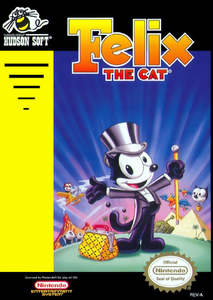