Felry Carnihum is a playable character controlled by the second player in Capcom's famous side-scrolling shooter game titled Varth: Operation Thunderstorm. She is a former athletic flight instructor and the daughter of the other pilot, most especially flying all her life and piloting her own plane since she was a teenager. She greatly not relied the entire control which a man was giving to other inventions and her doubt was proven accurate. As a talented engineer, she invited the reconditioning organization to prepare both planes. She doesn't have any battle experience, but sports a unique style of flight. Eventually in the operation, she piloted her main fighter plane called Dakao M-2451 Scimitar. 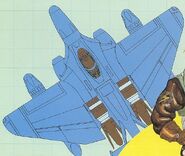 Dakao M-2451 Scimitar
Add a photo to this gallery
Retrieved from "https://hero.fandom.com/wiki/Felry_Carnihum?oldid=1691316"
Community content is available under CC-BY-SA unless otherwise noted.