Fierce Deity Link also known in japanese as Fierce God Link and Ogre Deity Link in manga and the video game is the spirit that inhabits in Fierce Deity mask and the true main protagonist in The Legend of Zelda: Majora's Mask. He is known to be the Termina alter-ego of Link and has the voice of the adult Link from Ocarina of Time. He has the size of Adult Link from Ocarina of Time and has the double helix sword to defeat 4 bosses and Majora, he is voiced by Nobuyuki Hiyama who has voiced the adult Link from The Legend of Zelda: Ocarina of Time as well in Soul Calibur 2 in Gamecube version and also voiced the anti-hero BlackWarGreymon in the Japanese dub version of Digimon Adventure 02. Fierce Deity Link is not an villain in the game, despite his brutal appearence, Fierce Deity Link has no pupils on his eyes, he has his armor, he has the tattoos on his face with blue and red and he has white hair. His appearence is an Adult-like form with the Fierce Deity Sword called Double Helix Sword when Link becomes his famous alter-ego.

Fierce Deity is the presumed name of a character from The Legend of Zelda: Majora's Mask . He is the spirit that is assumed to inhabit the Fierce Deity's Mask. There are very few facts truly known about the Fierce Deity.

When Link dons the Goron Mask, Zora Mask, or Deku Mask, he transforms into the form of Darmani, Mikau, or what is presumed to be the Deku Butler's Son, respectively. Due to this, it is believed that the spirit inhabiting the Fierce Deity’s Mask is that of a great god. When Link uses any particular transformation mask, he takes the shape of what the spirit inhabiting the mask looked like during its lifetime, with a few characteristics altered to look more like Link. Using this knowledge, it can be surmised that the Fierce Deity was a tall warrior god, who wielded the Double Helix Sword which was capable of shooting Sword Beams. Like with the other transformation masks, his exact appearance may be different from the one seen when Link assumes his shape.

Though the history of Fierce Deity is never elaborated upon in the game, it is implied, through what is said by the likes of Tatl, and the fact that Majora himself gives Link the god's mask, that the Fierce Deity Mask was created by a Deity far stronger than Majora, and that Majora could possibly have given the mask to Link in an effort to destroy them both. Fierce Deity's evil may be even darker than that which resides in Majora's Mask, as Majora calls him "the true bad guy", though this may just be a lie or exaggeration on the part of Majora, and that Majora considers itself a hero.

Another theory is that the Fierce Deity is Link's Terminan counterpart, due to the resemblance between him and Link, as no definite counterpart to Link is seen in-game. Though Link's other alternate forms retain some aspects of his appearance, the transformation masks themselves do not. However, the Fierce Deity's Mask itself shares Link's hat and some of his facial features even when not in use, and while in use, Fierce Deity Link's voice is the same as that of Adult Link from Ocarina of Time. The description of the mask as being filled with dark power does not affect this theory, since morality is not always consistent between Terminan and Hyrulean counterparts, as seen by the differences between the two incarnations of Koume and Kotake. The Fierce Deity's status as a god would seem to indicate that it is not Link's equivalent, though its power could also be interpreted as a more direct embodiment of Link's defining characteristic of being destined to accomplish legendary feats.

Though there is little evidence to support this theory, it has been suggested by some that when Majora realizes Link is a threat, it seals its spirit into the Fierce Deity's Mask instead of Majora's Mask in order to survive. If Link chooses to wear the mask, he succumbs to a great power, defeating Majora easily. If he chooses not to, he must face a far more difficult battle, but has not given into the possible trickery of Majora. This theory presents the Fierce Deity's Mask as a moral choice to the player; whether or not to use the possibly evil powers of "the true bad guy" to defeat a final boss. Moral choices are rarely present in the Legend of Zelda series, but it would make sense that one of this magnitude would be present in Majora's Mask, a game known for its intricate plot. This would explain why such a powerful weapon is simply gifted to Link, and would maybe reveal a darker, unseen ending to Majora's Mask. By wearing the Fierce Deity's Mask, Link sells his soul much in the same way that the Skull Kid had done with Majora's Mask. Therefore, when Link returns the emptied Majora's Mask to the Happy Mask Salesman, Majora has tricked both the Happy Mask Salesman and the player, and could survive on in the Fierce Deity's Mask. It could also explain why the final boss battle appears to feature incarnations of Majora and may never show the entity's true form. This theory is refuted by questions such as how Majora would continue to act through Majora's Mask while inhabiting the Fierce Deity's Mask, if it would even be possible for the entity to leave Majora's Mask, and why Majora would give Link such awesome power rather than wield it itself.

It is explained that Majora's Mask is carved from the armor of a powerful dragon, Majora. Majora guarded an empty land that was neither moving nor dead. This dragon's armor was sought after, as it was believed that the armor could grant wishes and give power. Many came hoping to claim the armor for their own reason, be them good or evil, but Majora killed them all. One day, a mysterious man visited Majora. This man played music for the dragon, who danced for three days and three nights before dying, supposedly allowing time to move forward. The man then carved a mask from the creature's hide, hoping to seal its power.

Interestingly, the traveler bears a strong resemblance to Fierce Deity, who has darker-than-average skin, and silver hair, and it is hinted in the story that the stranger is in fact a god, although why this being chose to approach and ultimately slay the beast is never explained, other than when he says, "I was drawn to this land by a strange force". Some further evidence pointing to this being the true identity of Fierce Deity, a point is made that the stranger is the first being that is able to overcome the beast of Majora, and that it does so with music that controls the flow of time.

In the Manga, he was referred to as the "Ogre Deity", a too-literal translation of the Japanese name of the mask. Oni usually means ogre or demon, but the use of the 鬼 (oni) character in the compound 鬼神 (kishin, fierce deity) is intended to ascribe the wrathful aspect of oni to the deity (神) thus described.

Fierce Deity Link is voiced by Nobuyuki Hiyama, who is better known for the voice of Adult Link from Ocarina of Time, Soul Calibur 2 GameCube Version, in two games of Super Smash Bros. series, he is better known for voicing the anti-hero BlackWarGreymon from the Japanese dub version of Digimon Adventure 02. 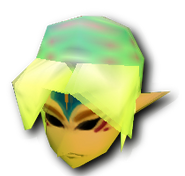 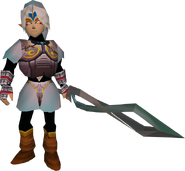 Link about to transform into Oni-Link 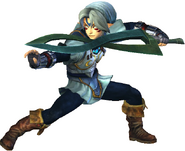 Fierce Deity Link in The Legend of Zelda: Majora's Mask

Link turning into Fierce Deity Link for the first time 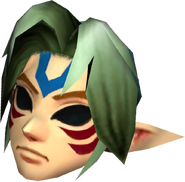 Add a photo to this gallery
Retrieved from "https://hero.fandom.com/wiki/Fierce_Deity_Link?oldid=1727450"
Community content is available under CC-BY-SA unless otherwise noted.