Alter-Ego of Link
Defender of Termina

Destroying Majora and the Bosses Remains.

Kill and destroy Majora and save Termina (succeeded).

Fierce Deity's mask first appears when Link receives this mask from Majora who has released Skull Kid from its control in order to challenge Link.

Link receives the Fierce Deity mask and puts on his face, causing him to transform himself into Fierce Deity Link who ressembles Adult Link from Ocarina of Time. As Majora goes inside of the Moon, Link follows him by shouting at him.

Inside of the Moon, Link doesn't have pupils while in his Fierce Deity form. But he can see with the help of Tatl. Link sees the Lunar Children wearing the Bosses Masks cheering at him. Link then see the fifth child lunar who wears Majora's Mask challenges Link in Good Guys against Bad Guys.

Link sees the Boss Remains coming to life to try to attack Link. But Link destroys the Boss Romains with his Fierce Deity Sword before attacking Majora who is changing to Majora's Incarnation to try to attack Link. But Link fights back before Majora changes into his Wrath form to try to strike him. But Link uses the power of the Fierce Deity Sword to impale Majora, causing him to disintegrate into dust before reverting back into his lifeless mask form, causing the Moon to get destroyed, causing the rainbow to appear in the sky.

As Fierce Deity Link, Link manages to return Majora's Mask back to Happy Mask Salesman, and his non-transformation masks are returned back to him.

Link then reverts back to normal and sees an fully-freed Skull Kid who smells him by recongnizing him as the Fairy Kid that he taught Saria's Song in Lost Woods. As Skull Kid, The Happy Mask Salesman, Link and Epona go to seperate ways, Skull Kid draws Link, himself, Tatl, Tael and the Giants as Link goes to find Navi. 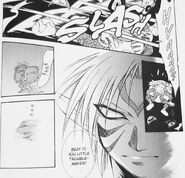 Fierce Deity Link destroyed Majora and reverted him back to his lifeless mask form, this time for good.

Link's heroic stare while in his Fierce Deity form.

Link turns back to normal after destroying Majora and saving Termina in the process.