"I'm tellin' ya, man. Every third blink is slower."

"How 'bout some organic fuel?"

"What you folks really need is a sweet taste of my home-made organic fuel."

Sarge: "WILL YOU TURN THAT DISRESPECTFUL JUNK OFF?!" Fillmore: "Respect the classics, man! It's Hendrix!"

Fillmore happy to see McQueen is still in town. 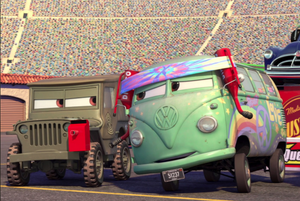 "There's a lot of love out there, y'know, man?"
Add a photo to this gallery

Fillmore, Flo, and Sarge welcoming McQueen back home when he returns from his racing season.

Fillmore, Sarge, and Luigi thanking Guido for their drinks.

Fillmore, Sarge, and Luigi sipping into their drinks.

Fillmore surprised to hear how Axlerod invited McQueen to join the World Grand Prix, only to be declined.

Fillmore, Sarge, and Luigi noticing Mater is not at the table.

Fillmore willing to be a part of McQueen's pit crew for the World Grand Prix.

"He's got plenty of fuel!"-Fillmore during the first race of the World Grand Prix.

Fillmore sad to find out that Mater has left to return home to Radiator Springs.

Fillmore and his friends believe Mater will be home safe.

Fillmore and Sarge in Italy.

Fillmore and Sarge enjoying some drinks.

Fillmore and his friends at the second race of the World Grand Prix.

Fillmore before the third race of the World Grand Prix in London.

Fillmore continuing being a member of McQueen's team after discovering Mater had gone missing.

"If you're implying that I switched out that rough excuse for alternative fuel with my all-natural, sustainable, organic biofuel, just because I never trusted Axlerod, you're dead wrong, man. It was him!"
Add a photo to this gallery

Add a photo to this gallery
Retrieved from "https://hero.fandom.com/wiki/Fillmore/Gallery?oldid=2189955"
Community content is available under CC-BY-SA unless otherwise noted.