To Declare her love to God (Abandoned)

To Help Hibiki Tachibana and the Symphogear heroines (Suceeded)

Tragic Heroine
Finé (フィーネ Fīne?) is the former villainess-turned anti-heroine in the Symphogear franchise. Finé was introduced as the main villainess of the first season of Symphogear; later, she eventually became good at the end of Symphogear G. She is the ancient human priestess who was hailed from an ancient prehistoric civilization.

In the first season of Symphogear, she was the mistress of her former minion/pawn Chris Yukine and a scientific researcher of the Symphogear relics and ancient technology, who seeks to end the Curse of Balal.

Finé is a tall woman with long white-blonde hair that goes past her hips, styled in a hime cut that parts into two "curtains" down her back; gold serpentine eyes; slightly tan skin (white in season two and onwards); and red or pink lipstick, or otherwise emphasized lips. When possessing a host, she usually takes her host's appearance, but can also change their body to look like her original whenever she pleases. She can also transform partially by giving her host the eyes of her original form, or her original form the eyes of her hosts.

At home, Finé prefers to be unclothed, wearing only a pair of lace-trimmed translucent black elbow gloves, butterfly lace-trimmed translucent black thighhighs, black heels with maroon soles, and a black belt choker with a butterfly emblem on the front. When conducting business outside, Finé covers herself with a loose long-sleeved black V-neck dress that reaches just past her pelvis, and a black bowler hat with a butterfly ornament and a purple ribbon rose attached. She also wears round black sunglasses with a dark tint that obscures her eyes at one point. It can be assumed that she wears these clothes in part to hide her similarity to Ryōko Sakurai, her host at the time.

In the past and as a spirit, Finé is seen in a priestess outfit consisting of a white hood with a short cloak, a long white skirt, a "knot" at the center where several teal-striped white strips originate to loop around her front and arms, and gold necklaces adorned with jewelry of different colours.

Finé was an extremely manipulative and charismatic woman. Her behavior is completely proud and cold; while she is peaceful and serious, she gets angry by having violence during battles against the SYmphogear Heroienes. During a public evidence, she is very tireless in her diligence and competence with other people always failing her plans. Finé is very honorable, quickly picked out weaknesses and improvise on the Symphogear heroines, and she always does her troubles for them when things went wrong. She is interested in science and technology; however, the same path — specifically, her need for lduties and reasons for everything. Upon her redemption, She was able to understand the real nature of the bonds between humans.

Finé responsibly abuses and manipulate people for her own malevolent actions, her plans for decisive entertainment, it is aware bout what happened to Chris Yukine, whom she treated her so badly in two years ago after she adopted her as a minion/pawn. With all of the terrible things done, Finé was able to put the mistreatment to Chris Yukine through torturing. With her bad actions, Finé is nihilistic, assuming the cruelty of the human race at the same time that she causes pain and suffering on heroes and other around her, refusing to have pity with plenty of people, notiching that her feelings above all other's and harrasing them and her facts and beliefs on people. Due to understanding about the people of humankind fighting and killing each other when Curse of Balal is active, most important with the breed of Noise dangerously to kill one another.

Finé also reveals herself to be a scientific researcher, on top of becoming self-proclaimed, accomplishing person by creating a great number of inventions with her own work. During twelve years, Finé was still possessing Ryoko Sakurai whom she cloned to almost success, Finé successfully created the Symphogear armor system in order to use as a tool to fight Noise. There, she also created a LiNKER and utilized four Symphogear heroine projects for the following: Kanade Amō, Maria Cadenzavna Eve, Shirabe Tsukuyomi, and Kirika Akatsuki as a test experimental subject. She encouraged Chris Yukine to awaken the power of Solomon's Cane and then utilized her for the power of Nehushtan Armor. Finé created various projects and experiments as well. Finé noticed that she was responsible for changing the course of Human Hisoty working the bodies of human people as her descendants. Finé is impressed that Hibiki Tachibana was able to have a medical fusion with the Gungnir relic after Kanade's demise. In the third season, Carol Malus Dienheim stated the fact that Finé was the one who practiced alchemy, and many teachings to help humanity connect after they were trapped by the Curse of Balal.

Finé wanted to be in love with One True God by making the construction to create the Tower of Babel to reach Him in Heaven, but is given up when she always loved Him or was making Him an ideal love interest; so that, she might obtain Holy Power and Honor through, as she shows no attraction on Him with her intentions. On the other side, Fine was remorsefully interested on young teenage women under her bad actions: she tortured Chris Yukine thorugh her own cruelty when her belief and pain can connect to other humans; she abused Hibiki infinite times, causing her to make her be suffered just before harrasing Miku Kohinata within a moment.

Despite her selfish deeds she had done, Fine shows a regular sense of peace and kindess at the end of the first season. She did a lot of all remorseful actions by unleashing pain and suffering to other people, listening to Hibiki's words and advice by convincing her to "believe in the song of [her] heart". (Carefully, she was able to take on Ryoko's eyes and voice by giving good words to Hibiki and everyone who used to be a heroic figure to her.) At the end of the second season, Fine was able to seek redepmtion by giving thanks to the words and help of Hibiki Tachibana. She hid herself in Shirabe's soul, and generously takes the suicidal blow Kirika Akatsuki's suicidal attack. With her final moments before fading away, Finé asks Shirabe to give a message to Hibiki, saying that Humanity must understand one another.

In the ancient past and the beginning of the universe, the soul of Fine appeared as revived priestess from the prehistoric ancient civilization, who got awakened thorugh the power of Aufwachen Waveform. Several of Fine's countless descendants exist thorughout the universe. However, She can always exist within one of people at a time. Fine was responsible for appearing at past events in human history across countless years, conviniently working to eliminate the observation or responsibility. So that, she can activate ancient technology to put an end to the Curse of Balal and become the honorable ruler of the world or universe. However, she began researching by collecting the Symphogear relics and heretical technology in order to fulfill her duty. She was able to prepare the plan of building the ultimate plasma cannon called Kadingir (named after the Sumerian term for "a tower to the heavens") as the key of her latest duty.

During the 2nd millenium, Fine was able to best Bavarian Illuminati by defeating Tiki, thus driving Adam Weishaupt for good. When Tiki was sealed and banished into the centuries-long sleep underwater. To that point, they could live four hundred years before death, Fine died of heroic sacrifice to save Shirabe Tsukuyomi. Even then, Fine takes a duty to oppose and haunt Illuminati in the 21st century form of her heroic legacy, Symphogear.

Four hundred years have passed after Bavarian Illuminati's sinister was over. At the start of the 3rd millenium and 2000 A.D., Fine possessed and awakened in the body of her favorite host/descandant Ryoko Sakurai before the start of the series, Ryoko completely became exposed to Aufwachen Waveform length given off by the power of Ame no Habakiri wielded by Tsubasa Kazanari, who did a successful singing, causing the soul of Ryoko to be absorbed by Fine. Fine started her plans, developing the first invention, Symphogear. Under the possession of Ryoko to secure funding from the government, Fine decided to continue the work by building the Kadingir in the elevator shaft for Division Two's underground facility. Ten years before the start of the series, Fine quickly stole the second relic Ichival before recruiting and adopting Chris Yukine, cause Fudō Kazanari, the retired commander of Division Two who had resigned from his duty. Genjuro Kazanari took a new position.

Two years before the start of the series Chris was adopted and rescued by Fine from the dangerous child sex. With Fine's help, Chris was transfrered to Division Two as a SYmhogear heroine. Fine easily abducted Chris after the arrival in Japan, hoping to use her as a tool or a puppet.

Fine made a smaller cameo in the flashback as Ryoko Sakurai, providing the mock battles for Shirabe Tsukuyomi and Kirika Akatsuki.

Carol Malus Dienheim mentioned her name in the 12th episode of Symphogear GX. Fine was the one, recently responsible for creating and practicing alchemy by causing people to understand knowledge and nature of this world after the Curse of Balal incident around them. 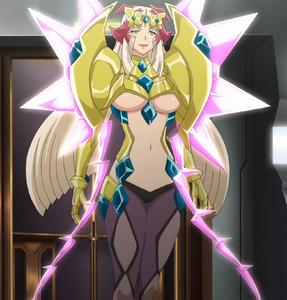 Fine with the Neuhstan Armor 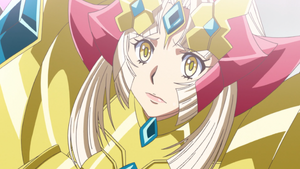 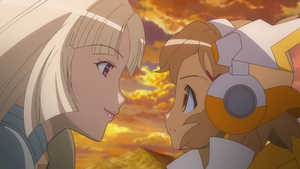 Fine before she turns into Stone 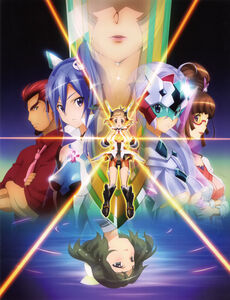 Retrieved from "https://hero.fandom.com/wiki/Fin%C3%A9?oldid=1758077"
Community content is available under CC-BY-SA unless otherwise noted.