Finland is one of the main supporting character of the Hetalia series. His human name is Tino Väinämöinen.

He is voiced by Takahiro Mizushima in Japanese and Clint Bickham in English.

Finland has blond hair and violet eyes (brown in Axis power-World series, blue-violet on original sketch and twinkle world), usually wears light-blue military uniform and sometimes he has a role as Santa Claus.

Despite him being describes as having a cute face as well as being kind-hearted and gentle, Finland is actually very powerful, as well as having "great physical strength" during fires and is abnormally strong against the cold. He also quite a drinker and said that he loves the combination of alcohol and sweets.

Out of the other Nordic, he has suffered the most hardships in his life, especially before he gained his independence from Russia. Sometimes he feels a bit like an outsider with the rest of the Nordics due to having a Finno-Ugric language rather than a language derived from Old Norse. On some strip, Finland can be "scary" from his words or having a "dark-side", for example when Denmark asked his opinion about decoration, Finland with cheery-face explain he wanted a "jet-black rooms with a skull and chains" so it can make Denmark scream cowardly, and when he found a female-puppy and Sweden asking him about the dog name, he had opinion that if he loves her name is " Tokko Bakudan-yarou" (meaning : Special attack ! bomb bastard) and "Bloody-Hanatamago" ( meaning : Blood covered flower-egg ) ,which make Sweden shocked and horrified. On Halloween special strip, Finland who wore skull-pirate cheerfully explains how scary his costume is, and also he scares many audiences with his skull mask when he juxtaposes his face on camera.

Finland is one of the Scandinavian nations, which he formerly part of Sweden/Swedish Empire. However, when Sweden lost his battle from Russia, he was forced to split from him and life at Russia's house. He suffered many hardships when he lived with Russia, until he got a independence from him, he now feels "free". He also allied with Germany on WWI and until WW2 thought he not a main participate or Axis Power like Italy and Japan. 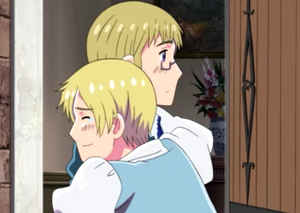 Tino and his friend Eduard (Estonia) 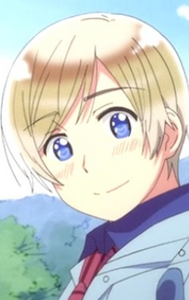 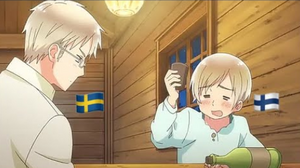 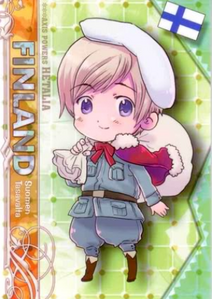 Retrieved from "https://hero.fandom.com/wiki/Finland_(Hetalia)?oldid=1860426"
Community content is available under CC-BY-SA unless otherwise noted.