High intelligence ,fighting skills in lightsaber ,Physical strength ,speed and agility ,Good control over the Light Side of the Force

Defeat and stop Kylo Ren from destroying the Resistance and rebuilding the Empire, avenge Han Solo by killing Kylo Ren

Finn is the deuteragonist of the 2015 worldwide epic space opera film Star Wars Episode VII: The Force Awakens. Finn is a trained warrior who was desperate to escape his past and is plunged into adventure when he meets Rey.

He is portrayed by actor John Boyega.

The infant who would later be known as Finn was taken from his family by the First Order during infancy and given the designation FN-2187. As a result he was raised from childhood to be a loyal member of the First Order. FN-2187 grew up knowing nothing about his real family, something that haunted him for years.

Initially a sanitation technician, FN-2187 later became a Stormtrooper. He was seen as a promising officer candidate in the stormtrooper corps, however both General Hux and Captain Phasma felt he had empathy that was interfering with his training.

FN-2187 was part of the First Order Stormtrooper force that was sent to the Western Reaches on Jakku to retrieve information on the location of Luke Skywalker. Some of the villagers chose to fight and FN-2187's friend was killed in the skirmish. Many of the villagers were herded together into a small area. After Kylo Ren interrogated then killed village leader Lor San Tekka, Ren ordered the Stormtroopers to kill all the villagers. The other Stormtroopers except FN-2187 cut down the villagers without hesitation and later, put the village off the map.

The captured Resistance pilot Poe Dameron was taken on board Ren's star destroyer along with FN-2187 and the other Stormtroopers. Once on board Captain Phasma ordered FN-2187 to submit his blaster to inspection so they could prove he did not fire on the villagers, and then to report for reconditioning. FN-2187 decided then to defect from the First Order. Breaking Poe Dameron out of confinement the two took a TIE fighter - Poe flew while FN-2187 took the blaster controls. FN-2187 was able to destroy the hanger and the fighters contained with in before the TIE fighter broke free and made its escape. Poe then asked FN-2187 what his name was, and FN-2187 gave him his designation, the only name he ever had. Poe decided he didn't like the designation and said he was going to call the former stormtrooper Finn going forward. FN-2187 decided he liked that new name and from that time forward he was known as Finn.

During the escape with TIE fighter, they agrued whether they have to return for Jakku or not. Finn stated that it’s best for them to escape as far as possible, but Poe agrued that they should be back for his droid due to it brought the piece of map for Luke Skywalker. Suddenly, their ship was shot down and Poe and Finn were separated. Finn was unable to find Poe, as he only discovered his jacked just as the remains of the fighter sunked into quicksand. He then goes for the nearby village, the same one where Rey and BB-8 at for water. Just as he drank some water, he spotted Rey whom dispatching Unkar’s men.

Just then, BB-8 spotted Finn, whom having Poe’s mantle, resulting the brief chase where Rey and BB-9 finally catch up and interrogate him. Another chase ensues with First Order’s soldiers showed up and invade the village, with them briefly hiding inside one of the tents with Finn desperately searching for laser gun. But their time for searching the weapons was up with TIE fighters gunned down the village. At first, she suggested to use her Quad Jumper, only for that vehicle destroyed by stray bolts, forcing them to stole a ship that little did they knew, was Millennium Falcon.

The dogfights ensues with Rey brought the Falcon for the remains of Galactic Empire’s remains for gained advantages. Finn managed to shot down their fighters’ pursuers before taking off to the space. Finn and Rey later declared their success before immediately goes to repair the ship.

During this point, Finn revealed to BB-8 that he actually the rogue storm trooper whom have gone too far betraying First Order and a fugitive, in which BB-8 feels that Finn is yet to worthy to be trusted. But with him now on it and Rey’s side, BB-8 had little to no choice to revealed that Resistance now at Ileenium System. Just then, their ship was pulled by a tractor beam of a large ship which Finn believes that it was First Order’s. But instead, when they hiding inside the ship’s shaft, the ship’s true owners, Chewie and Han Solo enters and found them. Han Solo and Chewie demand the explanation on how they stole the ship, in which during this point they realized that they now on the board of Millennium Falcon.

With the revelation where they have piloting the legendary starship and meeting the war heroes, Finn and Rey tries to convince Solo to help them for Luke, in which Solo finally relents. The encounter was cut short with Guavian Death Gang, whom loyal First Order, forcing Solo to have Rey and Finn hiding in one of the cells with him securing BB-8. Their situation turned out worsens with the party from Kanjikub, whom also have debts with Solo showed up. Worse, they revealed their loyalty to First Order by revealed that they were also ordered to hunt BB-8 and it’s allies. This prompt Rey and Finn to try to sabotage the doors to aid Solo, but they winds up to release Solo’s confined Rathtars!

The chaos ensues with both bad guys’ parties attacked by released rathtars where one of them dragged Finn away from Rey, prompt her to go for security cameras and shut the door between rathtar and Finn on it’s clutches, freeing him. They, Solo, and Chewie then goes to aboard Millennium Falcon and escaped by activating it’s hyperdrive. Although, Guavian Death Gang’s leader and a handful of his men survived the chaos and immediately reported Snoke about the mess that Rey and her allies caused.

Rey and Solo contended with even more damage to the ship once they were in hyperspace as Finn busily tending Chewie's wounds. There was an electrical overload and a coolant leak, so Rey suggested transferring auxiliary power to the secondary tank, which Solo had also come to the conclusion to do. Finally, Rey bypassed the compressor that Plutt had installed, solving the problem and ending their imminent danger. The group gathered in the ship's common area and BB-8 showed Solo the holographic map fragment that was in the droid's databanks. Solo, who pointed out that the map was not complete, explained the story of why Skywalker had disappeared in the first place. An apprentice—Kylo Ren—turned against the Jedi Master and destroyed Skywalker's attempt to rebuild the Jedi Order. Afterward, Skywalker vanished. Rumors floated around about where he had gone, but those closest to him correctly[8] guessed that he went off in search of the first Jedi Temple. Rey was surprised to hear that the Jedi were real, but Solo, who had once been skeptical of the existence of the Jedi himself, told her that the stories about the Jedi and the existence of the Force were all true.

Finn traumatized by the massacre on Jakku 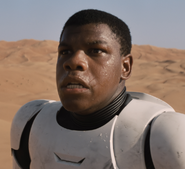 Finn after escaping from the First Order

Add a photo to this gallery
Retrieved from "https://hero.fandom.com/wiki/Finn_(Star_Wars)?oldid=806244"
Community content is available under CC-BY-SA unless otherwise noted.