Arsenal of weaponry and gadgets

Save the racers of the World Grand Prix from Professor Zündapp and Miles Axlerod (succeeded).

Finn McMissile (sometimes known as just McMissile) is the tritagonist of the 2011 Disney/Pixar film Cars 2. He is a sophisticated spy car who has a lot of high-tech spy gadgets and is also Holley Shiftwell's associate.

He is voiced by Michael Caine who also voiced Lord Redbrick.

At the beginning of the movie, Finn is trying to get onto a mysterious oil rig. He then finds out that the internationally wanted evil scientist known as Professor Z is leading the suspicious operations in there and that he and his minions have an incredibly dangerous weapon. Unfortunately, Finn gets discovered and is forced to escape the oil rig without getting enough information about Professor Z`s plans.

Later on, Finn and his assistant Holley Shiftwell mistake Mater for an American spy car because earlier, Rod "Torque" Redline secretly placed a device containing secret information onto Mater's body. The group then agrees to have a meeting tomorrow in Tokyo, where the first race of the World Grand Prix will take place. However, Mater is attacked by Professor Z's thugs during the race, but Finn saves him. At the airport to Italy, Mater and Finn are once again attacked by Professor Z's minions, but they manage to escape from them. Finn then requests Mater to help them stop Professor Z's plans. At the Italy race, Finn, Holley, and Mater all get captured by Professor Z and are tied up in Big Bentley. They are only moments away from being crushed to death by the clock's gears, but they manage to get away just in time.

The last race of the WGP then starts, and Mater finds out that Professor Z and his lackeys are going to make Lightning McQueen the next victim of their electromagnetic pulse emitter, so Mater goes to warn McQueen. Finn finds out that a bomb has been planted in Mater's air filter as part of a plan to kill McQueen. He tries to warn Mater about it just as he is about to meet up with the others. The army and the police, along with Finn, arrest Professor Z and order him to deactivate the bomb. He says that only the one who planted the bomb can deactivate it. It is later found out that Miles Axlerod (the former oil baron who sponsored the WPG in order to promote his new renewable green fuel Allinol) is the true leader of the Lemon cars and he was planning to ruin the reputation of all green fuels and have cars rely on fossil fuels instead, which would have made him and the Lemons incredibly rich, since they have many untapped oil reverses in their possession.

Back at Radiator Springs, Finn and Holley go to visit Mater and ask him if he would like to join them on another spy mission, but he does not agree to, saying that he is in exactly the place he should be.

In Cars 2: The Video Game

In the opening cutscene of the game, McMissile has been captured by Professor Z and the Lemons, but Mater saves him just when a Lemon is about to burn him to death with a flamethrower. The Lemons then chase Mater and Finn around the oil rig, but they manage to escape. Professor Z is then about to get away in a helicopter, but Finn and Mater make a big jump and reach him. It is then revealed that this was actually a spy mission simulation at C.H.R.O.M.E (short for Command Headquarters for Recon Operations and Motorized Espionage), which is an international spy-training center.

Finn also appears as a playable character in the game, along with his alternate paint job, Finn - Union Jack. 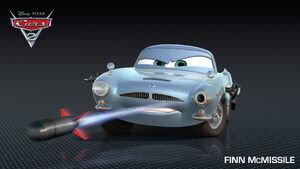 Finn, Holley, and Mater on the plane

Retrieved from "https://hero.fandom.com/wiki/Finn_McMissile?oldid=1913465"
Community content is available under CC-BY-SA unless otherwise noted.