Heroes Wiki
Register
Don't have an account?
Sign In
Advertisement
in: The King of Fighters Heroes, Female, Honorable,
and 30 more

Military Hero
Fiolina Germi, often called Fio, is the female protagonist of the Metal Slug series. She is a member of the S.P.A.R.R.O.W.S. unit of the Regular Army and she is Marco's partner since her first appearance in Metal Slug 2. She is currently a Master Sergeant.

The Germi family is widely known for their wealth and service in the military. The Germis were originally merchants who made their fortune in the Mediterranean region during the age of exploration, and still remain wealthy through their management of various corporations. They also have distinguished their role in the military in the past, first in the Napoleonic War in 1800s, then the Italian Unification Wars in the 1900s, and other various modern-day wars plagued with terrorism around the world. Many of the Germis who fought in the wars lost their lives, and it soon became a necessary custom for the chosen heir of the Germi family to serve in the military.

Fio's father, Alessandro Germi, was once a fearsome soldier during his earlier years. His body bore the scars from wounds to prove that he had seen his share of blood out on the battlefield. After he returned to his civilian life, he skillfully restored the failing family business, marking him as the savior of the Germi family.

Despite Alessandro's dire wish to give birth to a healthy son, he was surprised to find out that his wife had given birth to a daughter, and the fact that his wife could not give any further birth due to health complications.

He did not want to send his only child off to battlefield risking her life, and yet he couldn't ignore the Germi's military customs, either. So he ends up sending his daughter off to the military at the age of 20, but tries to keep her from going out into battles by assigning her to desk jobs using his connections and friends made during his stay in the military. However, all that came to a screeching halt when a paperwork mistake caused by ridiculous bureaucracy in the military had gotten Fio transferred to the Sparrows unit, a special operations branch of the Regular Army's Intelligence Agency that frequently carried out much more dangerous tasks than almost any other units in the military. Furious, Alessandro often waltz into military headquarters to keep his daughter from being shipped to the front by threatening the officers. And in the event that Fio did get sent out, he would use his own private jet to extract her out of the battlefield. People around him began to stop what he was doing, preserving the Germi family's historical service in the military, and thus preserving the entire Germi family line.

Fortunately, Fio manages to survive the battles that she fought in by keeping her head low, including several of the battles that occurred during Morden's attempts for world domination, and rapidly climbs up through the ranks. 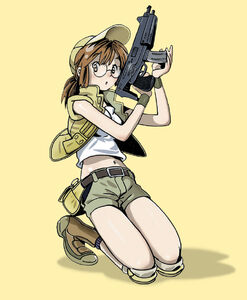