Escape with Hewie from the Belli Castle

Aureolus Fiona Belli is the main protagonist of Haunting Ground.

Although Fiona is not very athletic and lacks physical strength, she makes up for this with her wits and intelligence, brains over brawn, and often uses clever means to deal with the different predicaments she faces. She is very mature and is often quiet and introspective, but she is not weak-willed or introverted, and is highly determined to escape the castle alive. Fiona is also shown to be scared and frightened very easily, possibly due to a sheltered lifestyle.

Unlike both of her parents who are school teachers, Fiona studies art and music instead; at one point in the game Fiona comments that she has some skills at playing the piano, but no comment on how well. This shows that Fiona has a creative, artistic side.

Fiona is shown to care for animals and is repulsed by animal abuse and suffering; for example, if Fiona examines a birdcage with a dead bird inside, she comments about how sick some people can treat animals, "The terrible things that people do to animals these days. It's just so upsetting." When examining a tiger rug, she comments on how terrible it must be to be walked on all day, "Is this real? Poor little thing. Being stepped and walked on all day..." Fiona feels strong sympathy towards Hewie who had been tied to a tree trunk with a wire by Riccardo Belli and left to die, and decides to free him resulting in the beginning of their bond.

Fiona may have a heart condition because she is unable to run more than a few minutes without beginning to clutch her left hand against her chest, in addition to the constant vibrating of the controller. Her heart rate is very high, and she appears to have poor stamina and running endurance. She may also have anemia. The symptoms of anemia include chest pain, pale skin (Fiona has very pale skin), joint pain (Fiona is clumsy and trips a lot during the game), lack of oxygen and shortness of breath (backstepping several times in a row will cause Fiona to pant heavily). In panic mode, Fiona becomes extremely difficult to control, stumbles, and takes a while to get back up when knocked down on the floor. Other symptoms of anemia include fainting and dizziness (Fiona faints twice during the game). She may have fear-induced muscle spasms, since when she sees Debilitas after meeting Hewie, she instantly falls to the floor and is unable to stand up as if a stiffness has overtaken her body. She may also have some sort of photophobia or achromatopsia, because in panic mode, the screen turns black-and-white and has a shaky blur. Her physical condition may be attributed to the fact that her father is a clone.

shoulders, while her short bangs hang freely just above her eyes. When let down it appears shorter due to the layers, but the longest portion is about the same length. Her skin is pale, with a pink tint to it. She appears to wear minimal makeup. Her eyes are of a light blue color, matching her hair tie. Around her neck she wears a simple, dark brown choker with a small charm attached.

Her shirt's design is very complex. The main portions are of a white color, with a square collar and long puffed sleeves before stopping a few inches before the wrist. A blue brooch, presumably a sapphire, is encrusted just below the collar bone, with a small black border around it. Slightly above this, for the horizontal portion of the collar, is a brown strip of cloth with a white design embodied in it. There are similar strips on both sleeves, three total. The first, towards the top and the last, acting as a cuff, have matching designs, while the one that rims the end of the puffed part of each sleeve has its own design. The front of her shirt has various patterns running up her chest, on her stomach, and under the collar. The bottom has a snowflake-like design going over it, various parts above of which criss-cross and leave the areas below visible. The back of the shirt is open and beneath the bust line a blue string criss-crosses down and ends in a tied bow. Under all this a black undergarment, which is more visible from the back, with what might be a white strip at the bottom.

Her skirt is of a layered, dark purple skirt begins around her stomach area and the upper half is simple and solid, while the lower half has folding and is slightly translucent. The skirt is rimmed with a flowery design and is quite short, ending well above her knees.

Fiona wears black translucent stockings with a solid edge and rusty brown knee-high boots. Her boots have a lighter rim which ends in a small V in the sides, where the zipping begins, also separating a vine-like, almost floral design of a lighter color than the boots, matching the edges. Each boot also has a short, black underside heel, probably only an inch tall.

In the very beginning of the game, Fiona wears nothing but a cream-colored, silk sheet. The player can unlock multiple costumes for her, and equip four types of earrings, as well as four chokers which change her appearance in-game. Boots do not change Fiona's appearance, however.

Not much about Fiona's life prior to the game is known, other than that she once visited a museum when

she was a little girl and had a doll collection. Fiona was born with a hereditary birth mark on her back from her father, Ugo, and is the descendant of Aureolus Belli, as the 15th generation. She inherited the Azoth from her father, and is unaware of her ancestry.

Fiona had only recently moved away from her parents to attend college and was visiting with them when she was involved in a car crash. Her mother Ayla Belli was killed instantly in the wreck, and while her father survived the initial crash, he was immediately stabbed by Riccardo with a knife before he could even exit the driver's seat.

After the car crash with her parents, Riccardo carries Fiona's unconscious body with him to Belli Castle.

There, Fiona is stripped of her clothes and taken to the underground cellar by Debilitas. Fiona eventually comes to and finds the cage unlocked, taking the opportunity as a chance to escape. However, just before she leaves, Fiona briefly encounters a white German Shepherd dog.

In the castle's guest room, Daniella, the castle's maid, provides Fiona with proper clothing. Before Fiona can ask Daniella about her situation, Daniella suddenly leaves. Soon after, while exploring one of the castle's corridors, Fiona meets Debilitas, and he becomes convinced that Fiona is a large "doll" for him to play with. After a few hostile encounters with Debilitas, Fiona meets Riccardo, the castle's groundskeeper. Riccardo reveals to her that she is the heir to Belli Castle, as her parents, Ugo and Ayla, had passed away in their car crash. Fiona then passes out and Riccardo carries Fiona to the guest room.

Fiona wakes up during a nightmare of her parent's death and hears a dog whimpering outside. Fiona frees the dog outside and when she returns to the guest room, she finds Debilitas is sitting on her bed. Just before Debilitas attacks her, the dog comes Fiona's rescue and bites Debilitas' hand, causing him to flee. Fiona, safe and sound, bonds with the dog and remembers from before that his name is Hewie. Fiona, with Hewie by her side to protect her from Debilitas, searches for a way out of the castle. Fiona is guided by notes left by a mysterious man named Lorenzo Belli. Following Lorenzo's directions, Fiona heads to the castle's chapel where she finds a key that unlocks the path to the Old Mansion. In the chapel, Fiona encounters Debilitas and depending on the player's actions, Fiona and Hewie will either kill him or trap him underneath a chandelier.

After the boss battle, Fiona heads to the Old Mansion but before she can use the key, Daniella appears and urges her to attend dinner. At the dinner table, Fiona sits before Daniella who tells her that she cannot taste or experience pain and pleasure; Fiona, being uncomfortable, leaves the room to go rest in the guest room. A few moments later, Daniella reappears in the guest room and places her hand on her abdomen, causing Fiona to awaken. Daniella then repeatedly bashes her head against the guest room's window, causing a piece to come loose. She then begins to pursue Fiona with it throughout the castle. Daniella chases after Fiona out of jealousy that Fiona can bear children, experience pain, pleasure and human emotion because she possesses the "Azoth," which Daniella believes will make herself human and "complete".

Eventually, in the Old Mansion, Daniella's end comes when Fiona and Hewie enter a domed area and they face her in a fight. A mirror is revealed beneath her and, at the sight of her reflection, Daniella screams at such a high pitch that the glass above her shatters, bringing a huge shard down upon her, piercing her through her abdominal area. Fiona finds a key that Daniella was holding onto and enters another part of the castle, where she encounters Riccardo.

Riccardo pursues Fiona, as he intends to use her Azoth to live for all eternity. A while later, Fiona and Hewie escape to the forest outside the castle, however, Riccardo catches up with them. In a conversation between Fiona and Riccardo, Fiona discovers that her father, Ugo, is a clone of Riccardo and that Riccardo was the strange man that had killed her father. Fiona, unable to comprehend the information, faints and Riccardo carries her for the third time to the Water Tower. Of note, if the player is replaying the game, there will be a cutscene of Riccardo probing Fiona on an operating table. He examines her Azoth and says to himself that it will be ready in a few days.

In one of the cells located inside the Water Tower, Fiona is rescued by Hewie and they encounter Riccardo once again, who has used a alchemical substance on Fiona's eyes which perceives him as being invisible. At the top of the Water Tower, Fiona and Hewie manage to push Riccardo off the edge, resulting in his death. Fiona then walks across a bridge connecting the Water Tower to the House of Truth, where she meets Lorenzo Aureolus Belli, an old alchemist in a wheelchair that had been helping her out throughout her journey.

Fiona discovers that Lorenzo wants to offer her a chance to be immortal with him so that they can pursue the "Great Truth" together; the Great Truth is a philosophical revelation that Aureolis Belli, one of Fiona's and Lorenzo's ancestors, had dedicated his entire life searching for. However, unlike Lorenzo, Fiona doesn't want to be with him and in a conversation with Lorenzo, Lorenzo transforms himself from an older man to a younger man. Lorenzo pursues Fiona and Fiona eventually finds the Cane of Caduceus, the key to her escape from the castle. With Hewie by her side, Fiona defeats Lorenzo and escapes from Belli Castle. 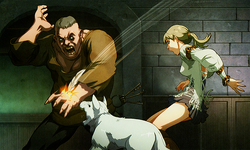 Fiona in Tatsunoko vs. Capcom.
Add a photo to this gallery

Retrieved from "https://hero.fandom.com/wiki/Fiona_Belli?oldid=2118196"
Community content is available under CC-BY-SA unless otherwise noted.