Playing with each other (Both)

Fiona and Dolly Molly are heroes from Mini Fighter. Fiona hails from Japan and is a master of puppeteering.

When Fiona was younger, she was bullied by other kids in school because she couldn’t speak. She learned puppeteering from a mysterious man named Ricky and when she got older, she uses Dolly Molly to attack her foes. She and Dolly Molly and the other dolls loves to play with each other and have tea everyday. Both Fiona and Dolly Molly went on a trip to create a wonderland. When even her mother and father did not recognize her, she not only hurt her heart, but also suffered from severe depression due to the business failure of her father's company and the divorce of her parents. Because they do not understand ordinary people in reality and do not try to get along with them, depression and autism are overlapped, falling into a world of their own. She even has an interpersonal disfigurement, so no matter who calls her, she never speaks that much. That doesn't mean she's mute who can't speak at all. She prefers to be alone and to chat with dolls, rather than hanging out with friends outside.

Fiona is 14 years old her normal form. She wears a collared long-sleeved white and purple dress with pink hearts on the trim and black stockings with black shoes.

Fiona is now 17 years old in her evolved form. She has different dress with a diamond checkered trim, ruffles, and a red bow, a small black top hat, diamond checkered stockings, and pink and red heels with a heart shaped heel.

Dolly Molly's head has a bandage, her left eye has a star, and her body is colored dark purple instead of pink. Both of her hands has claws and around her neck is a orange ruffled collar.

Fiona doesn’t really have a very bright personality. She is shown to be passive and self-confident who does not try to get along with friends that much. But, she loves playing with her dolls a lot.

Fiona controls Dolly Molly with skilled puppeteering. Presents can come out of Dolly Molly's mouth against foes. Fiona can swing Dolly Molly around or Dolly Molly can turn her hand into and axe. Fiona can use a dash attack with Dolly Molly and can use a powerful explosion at her foes and Dolly Molly comes back. Her evolved form's powerful attack makes her put on her bunny onesie and several giant stuffed dolls comes and attacks the enemy and Fiona whacks the foe with her closed parasol. 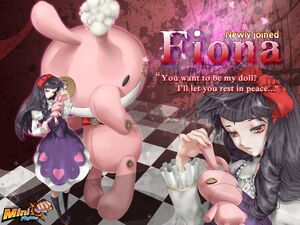 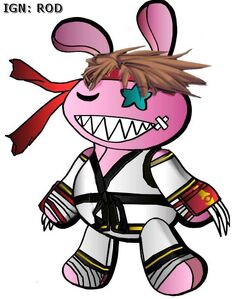 Dolly Molly dressed up as Kang 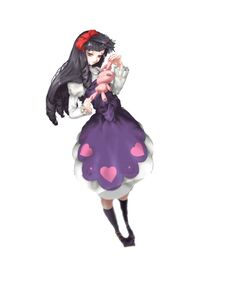 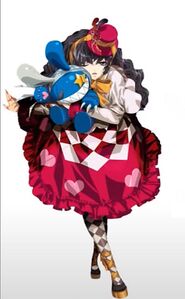 Retrieved from "https://hero.fandom.com/wiki/Fiona_and_Dolly_Molly?oldid=2210984"
Community content is available under CC-BY-SA unless otherwise noted.