She was created by Ramona Fradon and the late E. Nelson Bridwell, and first appeared in Super Friends #25 in October of 1979.

Beatriz Bonilla da Costa was born to Ramon da Costa in Brazil, and was a amateur model and showgirl before becoming a government agent for Brazil. She served the Brazilian government by going on secret operations, and doing one mission, came into contact with a pyroplasmic when it exploded.

She survived the incident, and the exposure gave her pyroplasmic powers, allowing her to manipulate fire and become a flame form. Afterward, Beatriz decided to take the identity of "Green Fury", and later "Green Flame" and left the Brazilian government. She then joined the Global Guardians, an international superhero team where she befriended, Tora Olafsdotter, also known as "Icemaiden".

Green Fury and Icemaiden worked with the Global Guardians until the team was dissolved when the Justice League International was formed, and the two decided to join the group. The Justice League International recruited them due to Black Canary's absence and being short on teammates, and Beatriz changed her name to "Fire" with Tora shortening her name to "Ice". After Tora's death by the hands of the Overmaster, she returned to Brazil to become the country's superhero.

Though she had some variable success in Brazil, she blamed most of this to Martian Manhunter being visible in the hemisphere. Shen then joined the Super Buddies, a group ran by Maxwell Lord, and became roommates with Mary Marvel. Fire also attempted to rescue Tora's spirit from a dimension similar to Hell, and the demon Etrigan suggested that Beatriz was suppose to die instead of Tora.

During the "Infinite Crisis" storyline, Beatriz returned to working as a detective after the Supper Buddies dissolved, and later worked with her allies in trying to find the connection between Maxwell Lord and Ted Kord's death. During their battle against the OMAC's, Beatriz was badly injured and was nearly killed, but was saved by Rocket Red's sacrifice. After the incident, Beatriz became a secret agent of Amanda Waller under Checkmate, where she gladly turned into a assassin.

On Prime Earth, Fire was a member of the Justice League International and worked with them on fighting against the Signal Men. 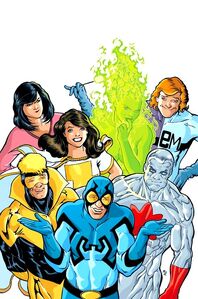 Fire with the Super Buddies. 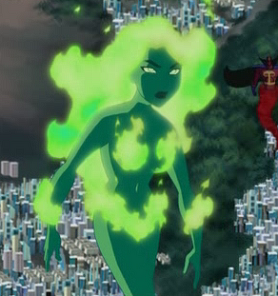 Fire in the DC Animated Universe.