Beatriz da Costa, alias Fire, was a member of the Justice League after the Thanagarian invasion, and she was usually seen accompanied by her friend Ice. Fire could project flame bolts and actually turn herself into a being of green fire, whereupon she could fly.

Fire took part in several League missions; she integrated the second line of defense against Amazo, fought Mordru, the Dark Heart mechanical spiders, and the army of Ultimen that raided the Watchtower. She was very respectful of the senior members, and hesitated in contradicting them.

Fire also escorted Shayera and the Flash to the Blackhawk Island. In this mission, Fire showed some interest in the Flash, with whom she exchanged some mutual flirting. Fire was a rather competent combatant, and she single-handedly managed to negate Doctor Polaris's magnetic power by overheating him.

Fire was also one of Roulette's unwitting contenders in her "Meta-Brawl: Glamour Slam". She fought opposite Black Canary and had the upper hand for a while, even managing to burn her, but was effectively overwhelmed by her adversary's sonic scream.

She is voiced by Maria Canals. 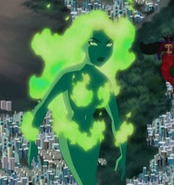 Add a photo to this gallery
Retrieved from "https://hero.fandom.com/wiki/Fire_(DC_Animated_Universe)?oldid=1433899"
Community content is available under CC-BY-SA unless otherwise noted.