To destroy the ORN Empire and protect the galaxy (and universe) from destruction. (Succeeded)

Despite the Galaxy Federation's initial success in the war with the ORN Empire, the antagonistic force continues to grow stronger. The Federation decides to decipher a plan to eliminate the empire by attacking it directing at its central source of power, unfortunately they are left unaware by the location of this central power source. In response, the Federation constructs a small, but powerful starfighter, the Styx, to track down and destroy cloaking devices installed on five separate planets. Upon successfully destroying these devices, Styx tracks down and destroys a Cerebrus space cruiser used by the ORN Empire and uses it to locate the position of a base that happens to be where the central source of power is located. Styx manages to infiltrate the base and maneuver its way through the obstacles in the hostile territory, it finally locates the power source: a supercomputer called Khaos. After an intense battle, the starfighter destroys the supercomputer and successfully escapes the base before it self-destructs. In the end, Styx returns to its base, and turns in its frame.

Styx appears in the fifth level assisting the Rynex in a space battle against the modified Cerebrus cruiser. Here, it is revealed that the starfighter has been mass-produced, as several individual fighters of the model engage in combat alongside its successor. In the end, all crafts save for three are destroyed in the battle, the surviving ships dock the Rynex in mid-flight and install the Thunder Sword modification onto the player's starfighter before leaving.

Although the original starfighter does not appear in this game. The ORN Faust uses its core to transform into an evil version of this craft, alongside ones of the Rynex and the Gauntlet. In the end, this version gets destroyed by the player's ship and then transforms into evil versions of the latter mentioned star fighters, before presumably being destroyed by the player's ship.

The Styx boosts a wide array of weapons for all types of attacks. Although it does not have as many as its predecessor, it does make up for it by only losing the equipped weapon upon destruction rather than all weapons. Two weapons are unlocked by default and can be upgraded further.

Sprite of the Styx with CLAW 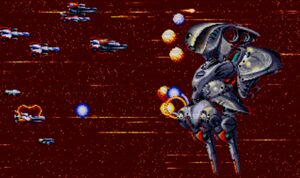 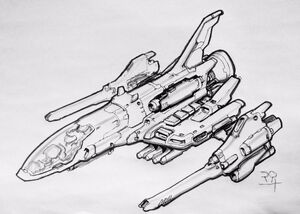