Fire Man is a villain-turned-hero from the original Mega Man game. He was created by Dr. Light for trash combustion. He can produce and manage flames as hot as 8000 degrees Celsius with ease. In the first scheme for world domination, Dr. Wily stole and reprogrammed Fire Man to be a combat robot for defeating Mega Man. His main attack is the Fire Storm, which can fire off powerful bursts of flame. As a playable character in Mega Man Powered Up, the remake of the original Mega Man video game, he can also create flame columns like Mega Man did. Fire Man has not always been on Dr. Wily's side because of his originality with Dr. Light. In Super Adventure Rockman he supports Mega Man's quest in search of Ra Moon, and in Powered Up he can be saved and played as a main character. Fire Man is said to have a personality as fiery as his abilities. While he's very passionate, he's also very quick to temper. As well, because of their clash in elements and personalities, Fire Man doesn't get along well with Ice Man. Fire Man likes camping and dislikes rainy days. 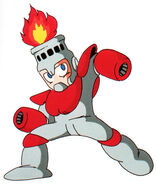 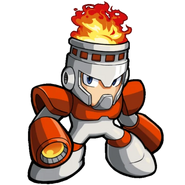