Fireman Sam (full name: Samuel "Sam" Peyton Jones) is a Welsh fireman and the titular protagonist of the television series of the same name.

In the first four seasons, Sam is voiced by John Alderton, who also voices all the other characters and provides the narration. In season 5, Sam is voiced by John Sparkes, who also voices Elvis Cridlington, Station Officer Steele, Norman Price, Dilys Price, Mike Flood, Trevor Evans, Tom Thomas and Dusty (although he does not speak), as well as The Farmer and Bitzer in Shaun the Sheep and the narrator along with a few other characters in Peppa Pig. Since season 6, Sam is voiced by Steven Kynman, who also voices Elvis Cridlington, Norman Price, James Jones (seasons 6-7), Derek Price, Charlie Jones, Jerry Lee Cridlington and Lambykins, as well as Duck the Great Western Engine in Thomas & Friends and Lofty in Bob the Builder (2015).

Sam is kind, wise, brave, understanding, and knows everything there is to know about fire and safety. He is single, but likes to spend close quality time with Sarah and James, his niece and nephew.

As well as being a fireman, Sam is also a keen inventor, and likes to make the most of his spare time at home by inventing things in his backyard shed. However, anything that Sam invents usually either breaks or malfunctions.

Sam is also the one that usually drives Jupiter, Pontypandy fire station's main vehicle, and of which resembles a TK Model Bedford, one of the UK's most successful commercial vehicles. 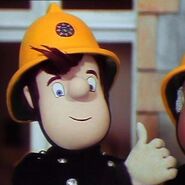 Sam in the classic series 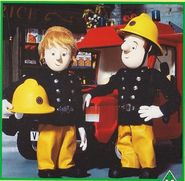 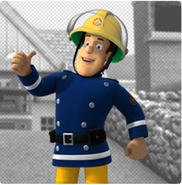