The First Spinjitzu Master
Father (by Wu and Garmadon)

Fish with their children
Teaching the art of Spinjitzu

The First Spinjitzu Master is the posthumous overarching protagonist of LEGO Ninjago: Masters of Spinjitzu. He is the father of Wu and Garmadon and also the grandfather of Lloyd Garmadon and creator and former protector of Ninjago. He was also Misako's father-in-law, and Lloyd's paternal grandfather.

He was born from the worlds of both the Oni and the Dragons, the warring sides of a seemingly never-ending conflict within the first realm. Unwilling to choose a side, he abandoned his original world to create the realm of Ninjago using the Golden Weapons.

After defeating a dark entity of pure evil, The Overlord, and splitting the land into two halves, he empowered humans with Elemental Powers to become his guardians. Eventually, he fathered two sons, Wu and Garmadon, and entrusted them with defending the Golden Weapons. Shortly before his demise, he sealed himself into a tomb deep in the Endless Sea, where the Realm Crystal was also stored away.

After the Oni were vanquished by the efforts of the Ninja and his sons, the First Spinjitzu Master summoned Lloyd to an unknown place in order to thank him for saving Ninjago

The First Spinjitzu Master was born in the Realm of Oni and Dragons as a weapon until he realized that he could use his power for the greater good. After he journeys to the realm of Ninjago, he fight against his evil equivalent, The Overlord, and wins the battle, sealing him away, Afterwards, he would later father two sons, one with control over Creation, and the other with control of Destruction.

The First Spinjitzu Master was known to be wise, gentle, kind and brave, showing that he was willing to put his life over the millions who may had suffered due to his battle against The Overlord. 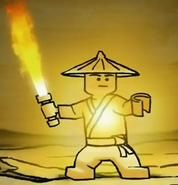 The First Spinjitzu Master fishing with his sons.

The First Spinjitzu Master fighting Worjira using a wind like tornado despite not apparently inheriting it.