NOTE: For the original book version of this character, click here.

Hanging out with the rest of the Dragon Riders.

Be the best dragon rider and shieldmaiden (ongoing)

Fishlegs Justin Ingerman is a main character in the How to Train Your Dragon franchise. He is Hiccup's best friend in the books. He is clumsy and inept, always making mistakes at inappropriate moments. Stoick the Vast calls him "Fisheggs", and Snotface Snotlout briefly called him " hickenlegs" in an episode of "Dragons: Riders of Berk". He and Dogsbreath pick on him constantly in the books.

He is voiced by Christopher Mintz-Plasse, who played Fogell in Superbad in English, and by Shun Miyazato in Japanese.

Fishlegs is a big coward, but also a great friend of Hiccup, and he is very loyal, friendly, and likeable towards his companions, and overcomes his fears when it comes to his friends and his dragon Meatlug.

He is also a great dreamer as shown in the episode "Follow the Leader".

It also appears that he has also developed a sense of trust of his own and also has immense confidence.

Fishlegs is quite the opposite to his book counterpart. He is very big and chubby and often spouts off information about dragons whenever he can, usually as if he were describing the stats of a creature in an RPG. This annoys the other teenagers frequently during their sessions at Dragon Training.

Later, Fishlegs learns how to fly on a dragon from Hiccup and ends up flying and owning the Gronckle used in Dragon Training, which he later names Meatlug. His analysis of dragons becomes invaluable for the rest of the Vikings when he identifies the characteristics and weaknesses of the Red Death.

Fishlegs is among the riders who participate in Dragon Racing shown at the beginning of the film. He cheers as Meatlug picks up a sheep, but it is taken by Snotlout, who then tosses it to Ruffnut. When a black sheep is launched, Meatlug catches it before Stormfly can. Fishlegs congratulates Meatlug for catching the black sheep before tossing it to Ruffnut, but Astrid takes the black sheep and wins the race.

Later, Fishlegs and the other Dragon Riders, led by Astrid (since Hiccup is with his long-lost mother), capture Eret, Son of Eret, so that they can go to Drago Bludvist, only to be captured upon arrival. He participates in a battle against Drago's forces, during which Hiccup's father Stoick is killed by a mind-controlled Toothless, under hypnosis from Drago's Bewilderbeast. Fishlegs' Meatlug is taken by Drago's Bewilderbeast, the new alpha, while he and his companions mourn the death of Stoick. After listening to Hiccup's speech that they are going back, Fishlegs and the others ride back to Berk on baby Scuttleclaws.

After Hiccup and Toothless return the dragons back to their side and defeat Drago and his Bewilderbeast, Fishlegs celebrates victory with the others. He then happily reunites with Meatlug, hugging her affectionately, and celebrates Hiccup's coronation as the new Chief of Berk.

Fishlegs returns in the third movie. He appears to have grown a mustache and also takes care of Meatlug's hatchling, Fishmeat. 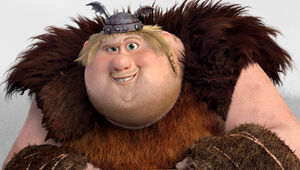 Fishlegs in the second movie

Fishlegs mourning the loss of Stoick as Meatlug falls under the Alpha's control.