Team
The Fivemen are the main heroes of Tokusatsu series, Chikyuu Sentai Fiveman. They are well-known as the five siblings of the Hoshikawa family, who were tragically separated from their parents during Zone's invasion, sent to board a ship along with Arthur G6 to be raised and discover/learn of the Fiveman technology.

A Dark/Troubled Past and Bright Future

In 1970, Doctor Hoshikawa was researching how to transform the planet Sedon into a green, lush world, and tested his research by attempting to grow flowers. On the day the first flower grew, the Zone Empire initiated an assault on the planet, he and his wife were separated from their five children in the process. Arthur G6 took the five children back to Earth and raised them. 20 years later, the five were promoted as teachers in the same school. The Zone empire is ready to choose Earth as its thousandth target and as they begin the invasion, three vehicles appear and counterattack the offensive. Five warriors descend from the vehicles and confront Zone. The Hoshikawa siblings have been creating the Fiveman technology and honing their skills in case Zone attempts to invade Earth. With further ado, five siblings prepare to battle with the familiar foes as Fiveman. After defeating the Zone Empire, the Fivemen left Earth to rescue their stranded parents.

Rise of the Gokaiger

Years later, the Space Empire Zangyack invaded Earth. This threat was so powerful that all of the first 34 Super Sentai, including the Fivemen, were reliable to oppose them. The 34 Sentai made the strong resistance against the ground forces, but when the Zangyack fleet itself attacked them, Akarenger ordered everyone to combine their powers and save the Earth. This resulted in the Zangyack fleet destroyed as well as the loss of their powers. However, they came back as Ranger Keys, that were spreading throughout the universe. 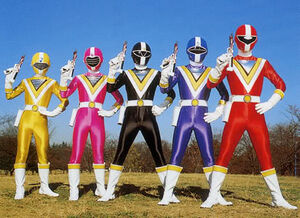 Retrieved from "https://hero.fandom.com/wiki/Fivemen?oldid=2118577"
Community content is available under CC-BY-SA unless otherwise noted.