Fighting alongside his brothers.

Fighting to end the Clone Wars

Clone Trooper CT-27-5555 or ARC-5555 (better known as Fives) was a clone trooper turned ARC Trooper during the Clone Wars and a member of Domino Squad. He served as a member of the 501st Legion throughout the war until his discovery of the Order 66 conspiracy and meeting a tragic end on Coruscant. He is a posthumous protagonist in the final season as well as in The Bad Batch's season 1 episode 7 "Battle Scars".

Just like all the other clones, He is voiced by Dee Bradley Baker, who also voices Perry the Platypus in Phineas and Ferb, Appa and Momo in Avatar the Last Airbender, Naga in the Legend of Korra, and Lion in Steven Univerese.

Fives began as a member of the inept Domino Squad on Kamino. Cursed with an inability to work together efficiently, which was further hampered by complications in the cloning process giving them all unique personality quirks, it seemed as if Domino Squad's members were fated to be failures. But incredibly the squad was able to pull through and entered service as "Shinies" (a slang term for rookies).

Domino Squad's members were stationed on the Rishi Moon outpost near Kamino, which came under attack from CIS droids. Though the timely arrival of Captain Rex and Commander Cody (who had been due to perform an inspection on the station) saw the clones to victory over the droids, all of the clones were killed except for Fives and Echo. The two were later made members of the 501st Legion for their heroic efforts.

The two next saw action back on Kamino, where they saw their old friend 99 (a clone who had been reduced to a decrepit form due to complications in the cloning process) be gunned down by droids while trying to help them. After the battle, Fives and Echo were promoted again, this time to ARC Troopers (which at this point in the war had become a rank any clone could attain as opposed to the originals, who were specially made and trained by Jango Fett).

Fives and Echo would go on several more missions together, but tragedy struck yet again when Echo was killed during a rescue operation on the Separatist stronghold the Citadel. Suddenly Fives was alone, the sole survivor of Domino Squad.

Fives was next seen aiding Captain Rex on the planet Umbara, where the 501st came under the command of the psychotic and ruthless (and secretly Dark Side) General Pong Krell. Krell's strategies saw clone lives be casually sacrificed in such numbers that Fives, who insisted that the clones were people whose lives were to be valued same as anyone else, began to work behind his back. Criticizing and disobeying Krell's every order, Fives was nearly executed alongside fellow Clone Trooper Jesse for insubordination however the squad that was to execute them followed Fives' example and chose to disobey orders and do what they believed was right. When Krell was exposed as a traitor, Fives helped capture him.

Fives' last mission was on a space station where Tup had a breakdown and killed a Jedi General, forcing the Republic battlegroup to retreat as they attempted to discern what was wrong with Tup. This in turn began an investigation by Fives into the cause of his death, which in turn caused him to come under scrutiny and criticism from the Kaminoans overseeing Tup. Determined to learn the truth, Fives delved deeper with the assistance of a medical droid who had been overseeing him and Tup and in the process learned that all clones were implanted with a chip that when activated would drive them to obey any order they were given, regardless what they themselves wished to do. Little did Fives know that this was the trigger to Order 66, and while trying to plead his case he was drugged by one of the Kaminoans who was in on the conspiracy. The drug made him more agitated and upon meeting Chancellor Palpatine and learning from him the full truth about Order 66, Fives snapped and attacked him. Forced to flee, Fives became a fugitive, whose being drugged and also now knowing what was destined to happen to the clones driving him mad. Thus when he tried to explain to Anakin and Rex what he knew it came off as little more than the ravings of a clone who had snapped. Clone Shock Troopers then converged on the scene and a panicking Fives was shot dead trying to defend himself. As he lay dying, he noted how like Tup before him, he would be free in death. His actions were not in vain however as Rex was able to give Ahsoka Tano a warning that would save her from being killed by him, Jesse, and the rest of the clones who followed through with Order 66 and give her a clue how to save him. 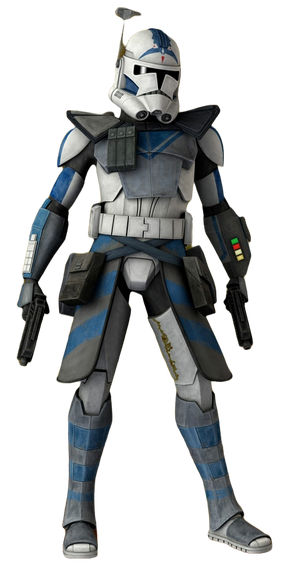 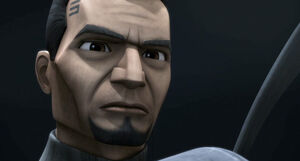 Fives with his helmet off 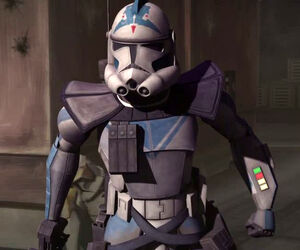 Fives in his ARC Trooper armor 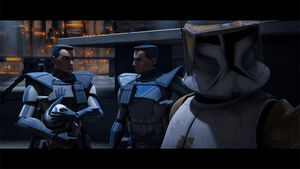 Fives with Echo and Commander Cody