Find Wreck-it Ralph and return him to his rightful game and marry Sergeant Calhoun (all succeeded).

Fix-It Felix, Jr. is the tritagonist in Wreck-It Ralph and a supporting character in its sequel, Ralph Breaks the Internet. He is also the titular protagonist in the video game of the same name, which happens to appear in the film, in which its titular anti-hero, Wreck-It Ralph, wrecks every building Felix fixes.

He is voiced by Jack McBrayer.

Felix is a cheery, lovable, kindhearted, and thoughtful hero. He brings joy to the Nicelanders by fixing their apartment windows whenever Ralph destroys them. As a result, he is often given praises, pies, and has celebrations thrown in his honor. During the celebrations, Felix is shown to be a gregarious and demonstrative person. He doesn't treat Ralph as badly as the Nicelanders do and even seems to be a bit sympathetic and caring for him. When Ralph tires of his role as the villain and abandons his game, Felix is courageous enough to take responsibility and risk his life for his game by searching for him. Felix is good right down to his core. He never swears and has a charm about him that reminds you that he was made to be a hero of the 80's. Felix speaks with a southern accent and is constantly heard using various phrases such as "Oh my land!" and "Jiminy, jaminy!", mostly when something shocking or amazing occurs.

However, while Felix wasn't antagonistic towards Ralph, he was (albeit, unintentionally) insensitive to Ralph's feelings for thirty years, never considering how Ralph felt about his role as the game's villain, simply taking him for granted, and didn't even think to invite Ralph to the game's 30th anniversary, making him find it awkward when Ralph asks to be invited to try some cake.

When Ralph game-jumped, Felix went to get him back, not interested in why Ralph had taken off, only interested in the well-being of his game, and is cross with Ralph once they reunite, expressing how he'd been rejected and treated like a flagitious criminal. It was there he finally realized that's what Ralph had been subject to for thirty years, and so they work together to help Vanellope and save Sugar Rush, significantly improving their relationship, where Felix calls Ralph "brother" and even asks Ralph to be his best man at his and Sergeant Calhoun's wedding.

Felix is a diminutive man with fair skin, brown hair and blue eyes. He wears a blue plumber's outfit with a white undershirt, and golden brown boots and gloves. His cap is also blue and has his initials detailed onto it. Throughout the movie, Felix always carries his golden hammer with him.

During gameplay, Felix is seen getting the medal after Ralph gets off the mud. During the 30 year celebration, Felix is seen celebrating with the Nicelanders. After Ralph smashes the cake, Felix notices that he has left the game. Felix responds to Q*bert and then game-jumps to Hero's Duty. He is mistakenly called a "Cy-Bug" by Calhoun. After that, he tries to rescue Ralph in Sugar Rush with Calhoun. He is imprisoned by Sour Bill in the Fungeon after escaping from the taffies, but Ralph breaks him out. During the battle with the Cy-Bugs, he escapes the game and Ralph destroys the clan and King Candy/Turbo by luring them to their deaths with the Cola volcano. Near the end of the film, Felix gets to marry Calhoun. Felix starts to return to his normal gameplay before Litwak pulls the game's plug. 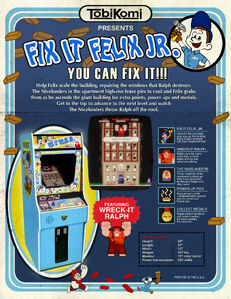 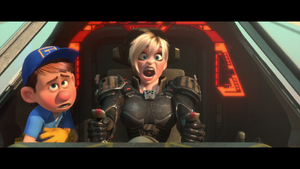 Felix reconciling with Ralph in the Fungeon.

Felix and Calhoun searching for Ralph and a Cy-Bug.

Felix and Ralph looking in shock as King Candy is revealed to be Turbo.

Felix's face after being slapped by Calhoun.

Felix meets Calhoun (who is pointing a gun at him).

Felix as he appears in Kingdom Hearts Union χ.
Add a photo to this gallery

Retrieved from "https://hero.fandom.com/wiki/Fix-It_Felix,_Jr.?oldid=2220896"
Community content is available under CC-BY-SA unless otherwise noted.