Help Jen and Kira to defeat the Skeksis (succeeded)

Fizzgig is the tritagonist in the 1982 film The Dark Crystal. He is a little brown dog-like creature and the pet of Kira.

He was performed by Dave Goelz.

Fizzgig acts like a ferocious dog but is very sweet, and as seemingly cute and innocent as he is, he can bare his fangs to protect his mistress.

Fizzgig has many dog-like qualities in personality, barking at strangers (or for attention) and biting at perceived threats, but he also has unique abilities, such as rolling into a furry ball and bouncing along the ground. This seems to be his primary method of getting from place to place instead of running. He also has a fluffy raccoon-like tail and several sets of sharp, pointed, shark-like teeth.

While Jen was exploring the forest, he stumbled upon a small hole where Fizzgig popped out and scared him, which led Jen to meet Kira who in turn decided to accompany on his adventure along with Fizzgig. Later on, they reach the Castle of the Crystal, but Kira gets captured by SkekSil while he caused a near cave-in on Jen; she told Fizzgig stay behind with Jen. Following Kira's escape from getting her essence drained and Jen revealed to still be alive from the cave-in, Fizzgig rolled to find the latter and inadvertently end up exposing her presence to the Skeksis.

As SkekUng attempted to take the Shard, Fizzgig dashes to bite on his hand while the creature refuses to let go before being thrown into the castle shaft. Fortunately, he caught onto the chains within it and was saved by Aughra, who used a wooden pitchfork to lift him away. Later he and the sage witnessed the unity of the UrRu and Skeksis as the UrSkeks and their departure from Thra. 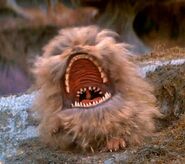