Flameslinger is an elven archer Skylander originally appearing in the first game, Skylanders: Spyro's Adventure. He is a Skylander of the Fire element.

Flameslinger is an Elven archer with incredible aim. In fact, he is so good that he wears a blindfold just to prove it. When he was young, he rescued a fire spirit from a watery doom and was gifted an enchanted bow and magical fire boots that he now masterfully uses to defeat evil throughout Skylands. With the scorched earth he leaves behind, you can always tell where he has been. 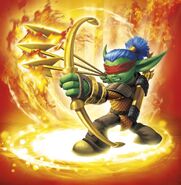