Flappy is very pale blue-white in color with sky blue markings and black (often appearing very dark red) eyes. The end of his tale is shaped like a flower and he has on a red-hot pink necklace with a golden yellow orb on it.

He is voiced by Kappei Yamaguchi. 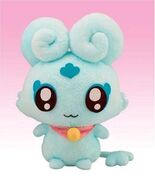