He is voiced by Vincent Tong, who also voiced Prince Nicholas in Barbie: Princess Charm School. In the Japanese dub from the series, he is voiced by Kenji Nojima.

Flash Sentry's pegasus pony counterpart appears first, in the film in the Crystal Empire throne room. His human counterpart appears later, helping Twilight Sparkle up after she stumbles in the hallways of Canterlot High. He appears again at the local coffee shop, where Twilight accidentally spills her drink on him and he jokes they need to stop bumping into each other. Rarity reveals to Twilight that he is Sunset Shimmer's ex-boyfriend.

When Sunset frames Twilight for ruining the Fall Formal decorations, Flash Sentry proves that the pictures are fake and Vice Principal Luna allows Twilight Sparkle to stay in the competition. Twilight is so thrilled that she hugs Flash Sentry. He then asks Twilight on a date to the Formal but mistakes all of her blubbering "no's" as her answer when she was really freaking out over the Formal being postponed. When the Formal does reconvene as originally scheduled, Twilight Sparkle clears up the confusion with Flash Sentry and agrees to share one dance with him. He is later one of the many students put under Sunset Shimmer's control when she rises to power. After Twilight and her friends defeat Sunset Shimmer and everyone is turned back to normal, Flash Sentry finally asks her for their dance and he imitates Twilight's odd and atrocious dancing style, previously seen in Sweet and Elite.

In Equestria Girls: Legend of Everfree, Flash gets over his desire to develop a relationship with Princess Twilight again and becomes friends with Sunset Shimmer.

Flash in human is a teenager boy with pale skin blue hair, blue eyes and eyebrows, black jacket with red and white stripe, white t-shirt with a cutie mark of blue shield and yellow thunderbolt, blue jeans with cuffs, and Black Converse low top sneakers size 8. In the seasons Flash's hairstyle is changed, with a new jacket and black sneakers

In pony version, Flash has blue hair, blue eyes, eyebrows and tail, and yellow skin along with the cutie mark on the side.

My Little Pony: Equestria Girls Holiday Special, Flash Sentry is shown in a MyStable picture on page 15 and mentioned in Anon-a-Miss' MyStable post "I saw Flash Sentry at the..." on page 30; he is "at his grandma's for the holidays" according to artist Tony Fleecs.

In My Little Pony: Friendship is Magic, Flash Sentry's pony counterpart made a few brief appearances as one of Princess Cadance's guards.

Flash Sentry was shown to be kind, gentle, benevolent, and a true gentleman. He returns Twilight's feelings of affection towards him as a human. He plays the guitar and is in a band, which performs at the Fall Formal and is specified in the screenplay novelization Equestria Girls: Through the Mirror to be named Flash Drive. 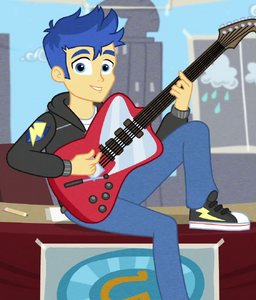 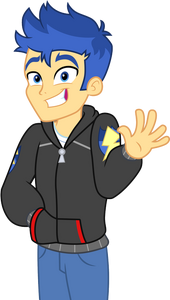 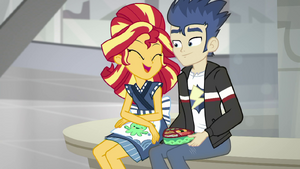 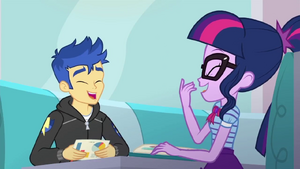 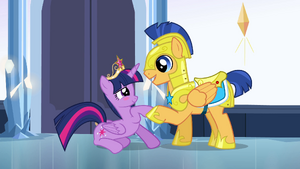 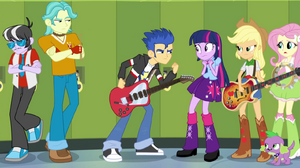 Twilight Sparkle being double-crossed by Flash Sentry, who is under the spell of The Dazzlings. 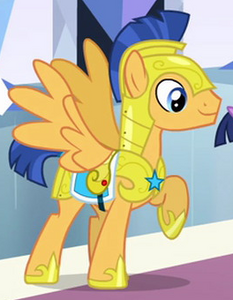 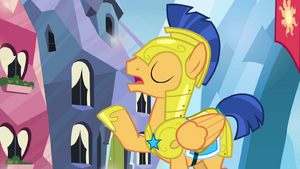 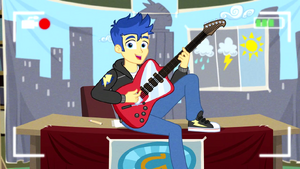 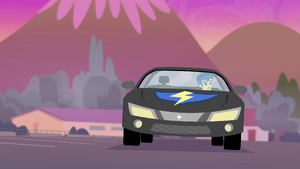 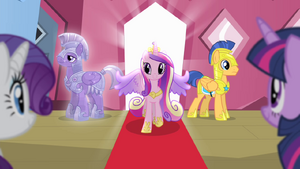