Mr. Reede (by his bosses, co-workers, and Greta)

To make it through 24 hours while telling the truth

Fletcher Reede is the main protagonist of the 1997 comedy film Liar Liar.

He is a fast-talking attorney, habitual liar, divorced father, and incredibly successful lawyer who has built his career by lying. He has a habit of giving precedence to his job and always breaking promises to be with his favorite young son Max, but Fletcher lets Max down once too often, for missing his own son's birthday party. But until then at 8:15 Max has decided to make an honest man out of him as he wishes for one whole day his dad couldn't tell a lie. When the wish comes true all Fletcher can do is tell the truth and cannot tell one lie. All he can do is tell the truth, the whole truth, and nothing but the truth.

He was portrayed by Jim Carrey, who also played Ace Ventura in the Ace Ventura film series, Stanley Ipkiss in The Mask, Lloyd Christmas in Dumb & Dumber, The Grinch in Dr. Seuss' How the Grinch Stole Christmas, Bruce Nolan in Bruce Almighty and Horton the Elephant in Dr. Seuss' Horton Hears A Who!.

Not much is known about Fletcher's early life. It is unknown when he was born (possibly in the 1960s), or what schools he went to. However, at least seven years ago, he graduated law school and passed the bar, and got a job at an unknown law firm that was owned by Mr. Mitchell Allan (who Fletcher apparently loathed). In the year 1990, he married a woman named Audrey and had a son named Max.

In 1995, Fletcher is now a busy lawyer who lives in Los Angeles. He now works at a different law firm that is chaired by Mr. Allan, who is the head of the partnership committee. Despite his hectic schedule, Fletcher loves his son Max, but his inability to keep his promises and compulsive lying in lieu of his career often causes problems between them. Although Fletcher may be too busy to hang out with Max, Max sometimes hangs out with Jerry, a hospital administrator who is dating Audrey. In court, Fletcher is willing to exaggerate the stories of his clients, and his current client, the self-centered, money-grabbing Samantha Cole has garnered the attention of the Partnership Committee, of which Mr. Allan is a part of. If Fletcher wins this case, it will bring his firm a fortune and boost his career. Fletcher lies to Max about missing his birthday due to work, when he is actually sleeping with one of his bosses, Miranda, in order to get a promotion. Dejected, Max makes a birthday wish that for one day his father cannot tell a lie. The wish immediately comes true, and Fletcher accidentally tells Miranda he has "had better" after they had sex (which leads to Miranda furiously throwing him out).

The following day, Fletcher realizes that he is unable to do anything dishonest. He cannot lie, mislead, or even deceive by withholding a true answer. Things get worse when he accidentally gets fresh with a new attractive big-bosomed female apartment tenant in the elevator, resulting in getting a hit in the eye. He then faces a devastating day in court, as he can't lie. When the court is recessed until 1:30, Fletcher desperately tries to lie about a pen that is blue by trying to claim it is red. He calls Audrey and tries to convince her to stay at her house so he can talk to her about something important (which was about how to deal with her taking Max to Boston because Jerry (who is moving there) has asked her to marry him). Fletcher races over to the house, but his car ends up in an impound for several parking violations (including speeding and unpaid parking tickets).

When Audrey tells him that Max had wished for this to happen, Fletcher tries to convince him that adults need to lie, but cannot give any type of answer at why he should continue to lie to his son. Fletcher also figures out that since Max wished for him to tell the truth for only one day, he tries to do what he can to delay Samantha's case since the magic wish will expire at 8:15 p.m., 24 hours after Max made the wish.

Due to his slow descent into insanity by being unable to lie, Fletcher loses his loyal assistant Greta after admitting he had lied about the "expensive" gifts he gave her, and miserly reasons for denying her pay raises.

When he faces court again, he goes to the bathroom to beat himself up to make it seem like he can't participate in court. However, stuck with telling the truth, he can't lie his way out of the trial. He realizes that he is unable to even ask questions when he knows the answer will be a lie, which is inconvenient as Samantha and her alleged affair partner Kenneth Faulk are willing to commit perjury to win the high profile case and he cannot ask him the questions they have been given answers for.

However, Fletcher finds a technicality that Samantha was underage when she signed the prenup prior to her marriage which renders it void and she is entitled to half of Mr. Cole's estate. But when Samantha decides to contest custody of their children, who Mr. Cole dearly loves, just because she wants more money from the child support payments, Fletcher regrets mentioning the technicality after seeing Mrs. Cole pull the unwilling children out of their father's arms, and shriek her demands for more money. Fletcher overhears this and tries to get the Judge to reverse the decision, but he talks back to the Judge and is arrested for contempt of court. He calls Audrey from the prison's phone and she angrily tells him that she is leaving for their flight to Boston with Max before hanging up on him when he asks her to bail him out.

Greta returns and bails Fletcher from jail, who forgives him and realizes that telling the truth has made him a better man and he rushes to the airport to stop Audrey and Max from leaving forever. He misses their flight, but he sneaks onto the tarmac by hiding in a piece of luggage, steals a motorized staircase, and manages to gain the pilot's attention by throwing his shoe at the cockpit window, forcing him to abort the flight. However, Fletcher's victory is cut short when he crashes into a barrier and is sent flying into a baggage tug, which causes it to crash into another tug and leaves Fletcher unconscious and with both of his legs broken. After waking up, he tells Max how much he cares about him and how sorry he was for breaking his promises. Despite no longer being under the wish's influence, Fletcher means what he says and adds that Max is his priority, and Max convinces Audrey to stay in Los Angeles. Fletcher is taken to the hospital and is healed there (it is unknown if he is sent to prison for his erratic behavior).

One year later, Fletcher is the head of his own more honest law firm with Greta as his continued secretary. Max makes a wish with his birthday cake and the lights come on to reveal Fletcher and Audrey kissing, but explains he wished for roller-blades instead of them reconciling. Fletcher clutches his hands into "The Claw" and chases Max and Audrey around the house with it. 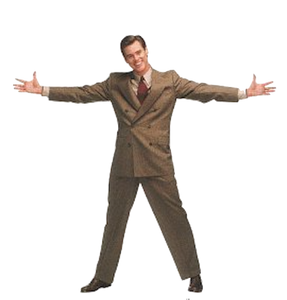 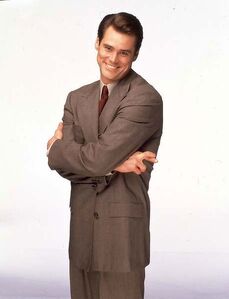 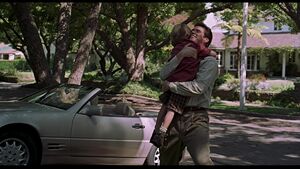 Fletcher and his son Max 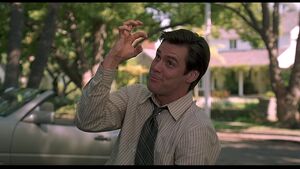 "Nothing can stop the Claw!" 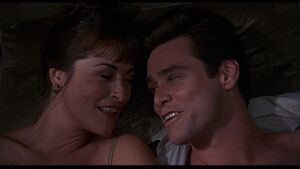 Max's wish of Fletcher not lying begins coming true when he tells Miranda: "I've had better!" 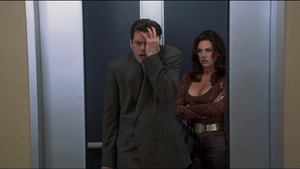 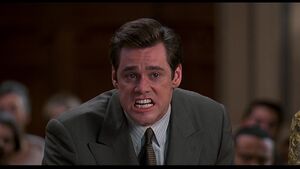 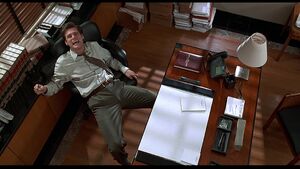 Fletcher trying to lie about a pen but failing 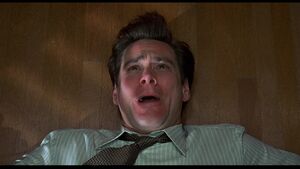 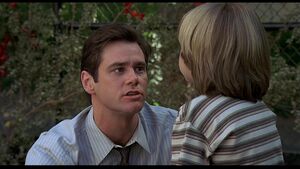 He asks Max to unwish the previous wish he had made but his son is unable to. 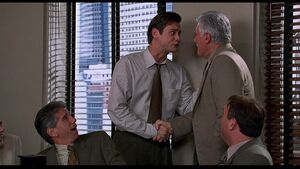 Fletcher expects to get in trouble for saying what he thinks about the committee but they seem to enjoy it instead. 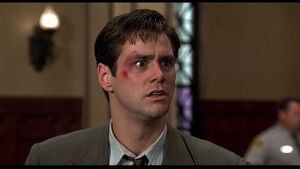 Horrified that winning his case made an innocent person suffer, Fletcher wants nothing more to do with Mr. Allan and his law firm. 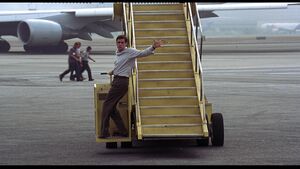 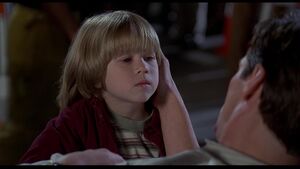 After stopping the plane, Fletcher promises Max that he'll never let him down again. 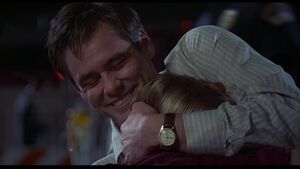 When Audrey decides that they won't be going to Boston after all, Fletcher hugs his son joyfully. 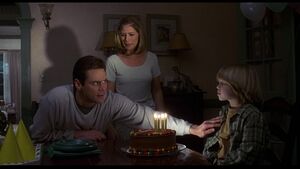 A year later, it's Max's birthday again and Fletcher is reluctant at Max making a wish in fear it may come true again. 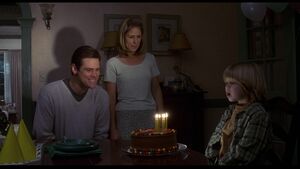 After some persuasion from Audrey, he allows Max to make his wish. 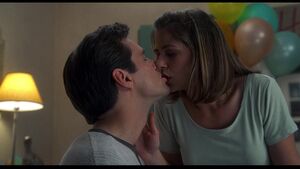 Fletcher and Audrey reconcile their relationship. 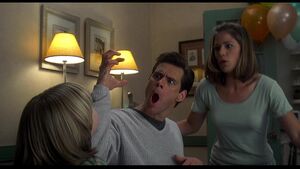 He then plays another game of the Claw with his family.