Cloudy with a Chance of Meatballs

Turning water into food with the FLDSMDFR.

He is voiced by Max Neuwirth as a child and Bill Hader (who also played Fear from Disney/Pixar's Inside Out) as a young adult. In the Japanese dub from the movie as a adult, he is voiced by Atsushi Kakehashi. As a child, he is voiced by Takuto Yoshinaga.

Taken by inventing from a young age, Flint developed many inventions with the intent to help but ultimately ended up causing more harm than good in most cases. Despite this, his mother supported him fully until the time of her death, which had little explanation or mention in the movie. His father was often skeptical of his inventions and tried to dissuade him from his hobby in favor of working at the family Bait and Tackle shop.

Early in the movie, Flint developed the FLDSMDFR (Flint Lockwood Diatonic Super Mutating Dynamic Food Replicator) in hopes of turning water into food as a means of providing new foods for his town, since their primary food source at the time was sardines, much to the dismay of the townspeople. When the FLDSMDFR initially fails, he determines it requires more power to function fully and decides to connect it to the city power grid. Sneaking away from his work at the Bait and Tackle Shop, Flint is briefly stopped by the officer Earl Deveraux (Voiced by Mr. T) before distracting him with a jaywalker and activating his machine, now connected to the power grid of the town. The machine reacts with unexpected propulsion, causing Flint and the FLDSMDFR to rocket through the town haphazardly, destroying the new Sardine Land attraction the mayor set up to attract tourism. Ultimately the machine escapes into the sky, and Flint declares the invention a failure as the entire town blames him for the destruction of Sardine Land and their tourism. Within minutes, however, the machine begins to take in water from the clouds in the atmosphere and generate food, which falls from the sky onto the town below. This makes Flint widely popular as he can now deliver massive quantities of whatever food the townspeople desire.

Everyone is going well until Tim fails to show appreciation for his son including the fact that the people (including the Mayor) start greedily requesting food for Flint to rain. Flint notices that the food is beginning to rain in massive quantities, but the Mayor (now morbidly obese) sees it as a better outcome for him and the city.

Citizens and worldly tourists in Chewandswallow are blissful until suddenly a large destructive tornado formed of spaghetti and meatballs threatens the town. Flint rushes to the lab to turn the FLDSMDFR off and attempts to send a 'kill code' to stop the machine. However, the Mayor accidentally destroys the communication device while trying to stop Flint from turning off the machine. A massive food storm threatens the world and Flint loses hope. However, his father encourages him to fix the mess. Flint gains self-confidence and places the kill code in a USB flash drive and invents the Flying Car 2. Flint, Sam, her cameraman, Manny (Benjamin Bratt), Steve, and Brent (Andy Samberg) set out to terminate the FLDSMDFR. Entering the stratosphere, they find that the machine is the sole core of a giant meatball and sends sentient food to attack them. In the chaos, Flint loses the kill code when the flash drive flies out of the Flying Car 2.

Meanwhile, in Chewandswallow, the citizens and tourists, with the help of Earl (Mr. T), escape. Mt. Leftovers collapses, causing an avalanche of food — a foodalanche — to destroy Chewandswallow. The foodalanche covers Flint's Lab with Tim still trying to send Flint the kill code. However, he survives and he successfully clicks send. Flint encounters the machine and jams the phone into the USB port. However, Tim had sent him the wrong document, but Flint destroys the machine by using his Spray-On formula and it explodes. They return safely to the aftermath of Chewandswallow. Tim finally shows his appreciation for his son and his inventions and then Flint and Sam celebrate with a kiss.

Revenge of the Leftovers

Continuing the ending of the first movie, as the people of Chew and Swallow rejoice as the machine was destroyed, Flint's favorite inventor Chester V arrives in a holographic form, saying that the United Nations has allowed them to clean things up, and also relocating the entire people of Chew and Swallow to San Franjose, California, and also giving Flint a chance to work at Live Corp., also promising that the people will be back within a month.

As they were relocated, Flint started his new job at Live Corp, Sam has been a well-known weather reporter/meteorologist, Baby Brent got a job at a local fast-food chain, Manny got random jobs and Earl became a cupcake staff, along with his son, Cal.

Unbeknownst to Flint, the FLDSMDFR survived the explosion and landed in the center of the island, and Chester is determined to find it. Chester invites Flint, his biggest fan, to work at Live Corp, where he meets Chester's assistant Barb, a talking orangutan with human intelligence. Six months later, Flint humiliates himself during a promotion ceremony when his invention "Party-In-A-Box" explodes. Meanwhile, Chester is informed that his search-parties on the island have been attacked by monstrous cheeseburgers which are learning how to swim. Fearing the world's inevitable doom, Chester tasks Flint to find the FLDSMDFR and destroy it once and for all. Despite Chester's demands to keep the mission classified, Flint recruits his girlfriend and meteorologist Sam Sparks, her cameraman Manny, police officer Earl Devereaux, and "Chicken" Brent. Much to Flint's dismay, his father Tim joins the crew and they travel to Swallow Falls on his fishing boat.

When arriving, they notice that a jungle-like environment has overgrown the island. Tim stays behind while Flint and the others investigate, finding a vast habitat of living food animals. Tim, searching for food at his abandoned tackle shop, encounters a family of humanoid pickles and bonds with them by fishing. Chester discovers that Flint allowed his friends to join on the mission and arrives on the island with Barb, chagrined and determined to separate them. After escaping a Tacodile attack, Sam notices that the foodimal was protecting its family, and begins to suspect Chester is up to no good. Flint finds his former lab and invents a device that can track the FLDSMDFR. Sam attempts to convince Flint to spare the foodimals, but Flint is intent on making Chester proud. Sam leaves in anger, along with the others (including his pet monkey Steve). In the jungle, Sam proves that the foodimals mean no harm by taming a Cheespider. Upon realizing Chester's intentions, the group is then ambushed by Live Corp employees.

Flint finds the FLDSMDFR, but notices a family of cute marshmallows and becomes hesitant to destroy the machine. Chester immediately seizes control of the FLDSMDFR and announces his plot to make his updated line of food bars out of the foodimals. A crushed Flint is tossed into the river but rescued by the marshmallows. Flint is taken to his father, who along with the foodimals, helps him infiltrate the Live Corp building that is under construction on the island. Flint frees the trapped Foodimals and confronts Chester, who threatens to make food bars out of his friends. Chester makes several holograms of himself to overwhelm Flint, but Flint uses the "Party-In-A-Box" to expose the real Chester. An army of Foodimals arrive and Flint's friends are freed by Barb, having a change of heart. Chester tries to make off with the FLDSMDFR but is eaten by a Cheespider. With the island safe from Chester, Flint returns the FLDSMDFR to its place and the foodimals continue to live in peace as more are born. Flint fishes with his father for the first time, finding it enjoyable. 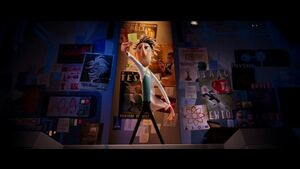 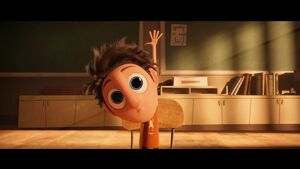 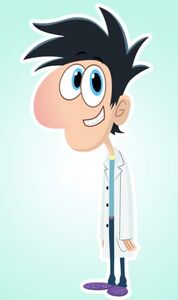 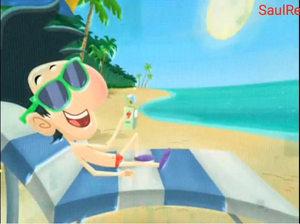 Flint in his red speedo. 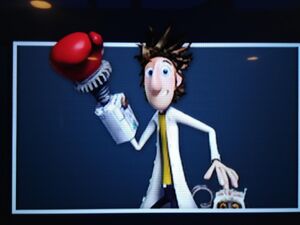