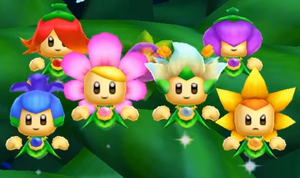 Floralians, also known as the People of the Sky, are a flower-based variant of fairy that first appeared in Kirby Triple Deluxe. They are a kind-hearted race that reside in Floralia, an asteroid system that hovers above Popstar.

Only female Floralians have appeared in the Kirby series, with each having a different species of flower attached to heads. Their bodies lack arms and legs, but they have a pair hands that float at their sides. The female Floralians seem to be clothed in a skirt made from green leaves and also wear a big round jewel around their necks.

The People Of The Sky

This coalition comprises the Floralians's ruling caste.  They are based off different flowers.

The Floralians were happy until their Queen, Sectonia, betrayed them and attempted to take over their home so she can be the new ruler.  They dropped a seed in their last ditch attempt to save themselves.  Kirby heeded their call and, using the beanstalk that sprouted from the seed's impact with the planet, left his home to go to the orbiting Floralia in an attempt to save them, but Taranza kidnapped King Dedede (Although that was a good thing since King Dedede assisted his former rival.)  Kirby and his friends saved Floralia and inhabitants, defeated Queen Sectonia, and became friends with the Floralians.  Due to their remote location, the Floralians missed out in Kirby Planet Robobot, but did make a cameo as a sticker where the pink Floralian leader is shown laughing, though it is just her face and the body (hands included) is missing.

Names In Other Languages

Both meaning "People of the Sky"