Being with her husband & son

Protector
Florrie is a major character in Madagascar: Escape 2 Africa.

She is the alpha-lioness, the wife of Zuba, and the mother of Alex (known to both parents as "Alakay"). Florrie isn't named in the film, not even in the credits.

Florrie is voiced by Sherri Shepherd, who had done press and promotion not only for her, but for Zuba, due to Bernie Mac's death.

Florrie is Zuba's wife, therefore the alpha lioness of the Pride that lives on the Wildlife reserve. Florrie and Zuba had a son together, whom they named Alakay. After their baby son was taken from poachers, Florrie and Zuba both believed that the poachers killed their son. However, unknown to both of them, Alakay survived and ended up in New York and took on the name "Alex."

Florrie is the first to recognize Alex as their son when he and his friends crash landed in Africa. After Zuba steps down as Alpha lion, the family goes into hiding. Later in the movie, Florrie convinced him that they should be glad that they have their son back in their lives.

At the end of the movie, Florrie embraces her son and husband as they return home and she later appears at Skipper's wedding to his hula girl bobble head and wishes the penguins, Phil and Mason goodbye.

Florrie returns in the fourth fim of the Madagascar franchise and helps her Son and his friends try to get back to Madagascar and save the lemurs.

Florrie is loving and more understanding than Zuba is. She also accepts Alex for what he is. She acts like the voice of reason for her husband.

Florrie is a slender lioness with blue eyes and black eyebrows. 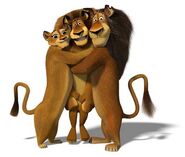