Wallace and Gromit: A Matter of Loaf and Death

Protect Wallace and Gromit from Piella

Fluffles is the deuteragonist from the final Wallace & Gromit film, A Matter of Loaf and Death. She is Piella's beautiful and caring, yet slightly nervous and abused poodle, and the love interest (later girlfriend) of Gromit.

Fluffles is a white poodle with black eyes, black eyelashes, pink eyeshadow, a black nose, and a red collar.

Fluffles is slightly nervous and a caring soul, however she was somewhat angry with her owner, Piella Bakewell when she bites her.

Fluffles has shown herself to be quite brave, as when Piella snaps, Fluffles gains the courage to not only stand up to her, but openly fight her to protect her new friends.

Her compassionate nature is shown when, despite the woman's cruel and downright abusive nature, Fluffles was grief-stricken when Piella was devoured by Crocodiles, and was shown to mourn her afterwards.

Withdrawn and lacking in confidence due to many years of unkind treatment, Fluffles is nonetheless a caring soul who strikes a romantic chord with Gromit. Like Gromit, she does not speak, but makes dog sounds. She and Gromit soon fall in love, and are shown several times throughout the film to hug, hold hands, and blush around each other. In a brief clips of footage outside, Fluffles had carved "F heart G" in a tree outside Piella's house.

After Wallace realises that Piella was trying to kill him with a bomb, the latter takes Fluffles hostage by grabbing her by the throat, warning him not to try anything otherwise she would kill Fluffles. Fluffles, finally having enough of Piella's treatment, bites her owner on her hand, forcing her to drop the Poodle. Telling Fluffles that she'd crossed her too many times, Piella cruelly slaps her.

Just as Piella was about to kill Wallace with a heavy wrench, Fluffles uses a forklift to save him and procceeds to use two giant oven mitts as boxing gloves to fight her former owner. During the fight, she accidentally sends Wallace flying out with the gloves, but still manages to gain the advantage over Piella. However, after the bomb drops down Wallace's pants, Piella retreats in the balloon, leaving them all to die.

Thinking fast, Fluffles and Gromit pour tons of dough into Wallace's pants, which manages to save Wallace's life at the cost of a huge hole in the back of his pants. After this, Fluffles, along with Wallace and Gromit, watch as Piella, now having lost all of her sanity, taunts them as she flies away. But true to Wallace's warnings, the balloon couldn't support her weight and she sinks into a zoo, where she's devoured by Crocodiles, to which a horrified and grief-stricken Fluffles faces away and hugs Gromit, who tries to support her.

After Wallace decides to have a cup of tea to get over the ordeal, Gromit takes her hand and asks her to join them. Fluffles is shown to be touched by this, but due to still being upset over Piella's death, she declines. After saying goodbye to Gromit, she leaves. However, just as the two went off to deliver bread to cheer up, they found Fluffles waiting outside the garage door, presumably having reconsidered Gromit's offer.

Seeing her upset, Wallace and Gromit invite her to join them, to which she happily agrees. The trio put on chef hats and drive away into the sunset, the van swerves and Wallace exclaims, "Woah! Both paws on the wheel, lad - concentrate!" possibly meaning that Fluffles and Gromit kissed and are finally in a relationship. It is also hinted that, due to her owner's death, she will now live with Wallace and Gromit, helping them deliver bread. 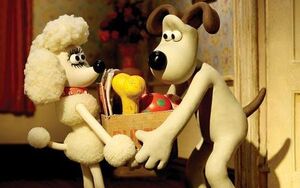 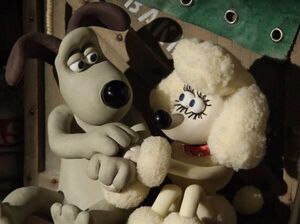 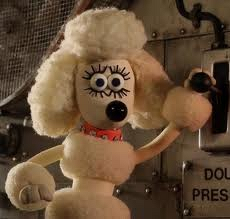 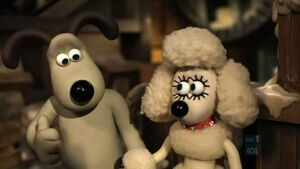