To care for Babe

Her mate Rex
Babe
her owner Hoggett
other farm animals

Fly is a female border collie in the 1995 acclaimed family film Babe. Fly adopts the titular pig Babe and teaches him how to herd sheep Fly is at first reluctant but quickly eager to teach Babe to herd sheep while her mate Rex is hesitant. She also learns more about sheep herself along the way.

She was voiced by Miriam Margolyes.

Fly first appears sitting near the farm as Arthur Hoggett returns home from the country fair carrying a pig named Babe he won. One of her puppies asked her what is Arthur carrying and she replies that it is a pig. One the puppies asked if they also grew up Arthur and his wife Esme Hoggett will eat them. She replies that Arthur and Esme only eat sheep, ducks and chicken. They go inside the farm where Babe is been placed and Rex her mate lets them stay with Babe. Fly then instructs Babe that only dogs and cats are only allowed in the house. When the living room is been accidentally destroyed by Ferdinand, Fly listens at Rex instructing Babe to stay away from Ferdinand and the house. Some time later when Fly's puppies are for sale, Babe then asked if he can call her "Mom" and she accepts.

Christmas arrives when the Hoggett's relatives arrive to spend with them and Babe is almost chosen for Christmas dinner, but chose duck instead after Arthur remark Esme that Babe may be a prize for ham for the next country fair. One day Babe alerts Fly and Rex that sheep rustlers are stealing their sheep and they save them including Maa who Babe meet earlier. When Babe separates the brown chickens from the white ones, Arthur brings Babe to the field and where Fly instructs Babe how to be sheep pig and the sheep cooperate. This cause Rex to become jealous as an insult to sheepdogs. Later that night while Babe was asleep and Arthur and Esme are eating, Rex attacks Fly. In his rage, he injures her leg and accidentally bites Arthur's right hand who hears them fighting and tries to break them up. Rex is then chained and sedated leaving the sheep herding job to Babe and Fly has her leg treated.

One day a group of wild dogs attack the Hoggett farm killing Maa, Babe who scared the wild dogs away was being falsely accused by Arthur for killing Maa and angrily prepares to shoot him. Fly who was devastated at Maa's death then informs the sheep what really happened. Learning the truth, Fly then realizes that Arthur is going to kill Babe, she distracts him from shooting Babe by barking and Esme informs Arthur that she received a call from the police that the wild dogs attacked the other farm owned by the Mitchells has lost 6 lambs and asks why he bring out his rifle and Arthur realizes it was the wild dogs who killed Maa not Babe. Maa's death devastated the other animals including Ferdinand.

When Esme is gone for a trip with her friends, Dutchess the Hoggett's nasty cat revealed to Babe that humans eat pigs, learns from Fly is true. The next morning Fly finds out that Babe runs away and she and Rex whom she informs at what Dutchess has done to Babe and regrets his behavior earlier alerts Arthur and begin search for him. They find him in the cemetery where Maa was presumed to be buried and bring him home. She and Rex possibly scolds Dutchess for saying those terrible words to Babe.

During the Sheepdog contest, Babe tries to talk to the sheep that he will herd them, but they ignore him. Fly informs Rex if those sheep won't talk to Babe, Arthur is going to be an idiot and she doesn't know what to do about it. Rex then says there's only one way to help him out and he must go back home and promise to be back in time. Fly watches Babe from outside the sheep field as Rex finally arrives and gives Babe the password he received from their sheep herd. Rex then informs her that it's up to Babe. Babe herds the sheep follow his instruction and gets the perfect score and Fly and Rex were very pleased at Babe and they lick each other in triumph while a very happy Arthur says to Babe who sits beside him "That'll do pig. That'll do" and Babe sighs happily.

Fly is first seen welcoming Babe and Arthur who has returned from a parade in honor of Babe. She is then seen with Rex near Arthur after he had an accident in the well in parties because of the awkwardness of Babe, who then comes to try to be forgiven near the injured farmer.

When the farm starts to approach bankruptcy, Esme has no choice but to go to Metropolis with Babe to earn money at a fair but the pig hides, always ashamed for what he did. Fly and the other animals will see Babe, hidden under hay to encourage him to go to town because otherwise, the farm will be sold and they will all be separated. Finally summoned by his adoptive family, Babe agrees to go to Metropolis. After the pig gets into the Hoggett's car, he asks his adoptive mother why she will not come so that Fly will answer that she would like but that it is only him that is asked, before expressing all her confidence in her adopted son because she knows he's a brave pig.

Fly was not seen again until the end of the film, where Babe not only found the money to save the farm, but also brought back lots of new friends who helped him, and in addition, Arthur was completely recovered. 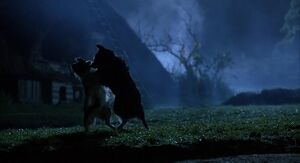 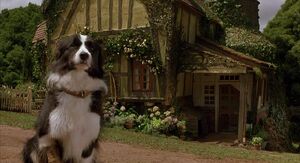 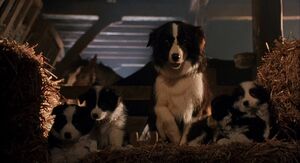 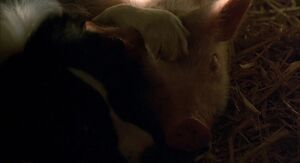