The Greatest Pilot in All of Skylands (self-proclaimed)

Safe Skylands from Kaos, The Darkness and The Arkeyans

Flynn is a Mabu who is one of the supporting characters in the console versions of Skylanders: Spyro's Adventure. Calling himself the "best pilot in all of Skylands", he is armed with a big ego and a love for enchiladas. He has a crush on another Mabu named Cali.

He is voiced by Patrick Warburton who also voiced Joe Swanson, Kronk, Ian, and many others.

Flynn is notable for his very overzealous personality, especially when it comes to impressing girls. He often calls himself 'the greatest pilot in all of Skylands'. He has an arrogant demeanor, as he often takes credit for things the Skylander does. In addition, Flynn can be accident-prone and goofy while adventuring with the Skylanders.

Although he has an very huge ego, Flynn does have a good heart and is extremely idealistic. He is also brave, as evident in The Machine of Doom when he was held captive by Kaos, Flynn was willing to sacrifice his own welfare for the Skylanders to leave with an item that could give Kaos ultimate power. Likewise, Flynn shows knowledge of flight equipment. As displayed in Swap Force, he relies too much on machinery and isn't used to different ways of traveling around apart from using a ship.

Flynn, Cali and Glumshanks travel toward the Vault of the Ancients. 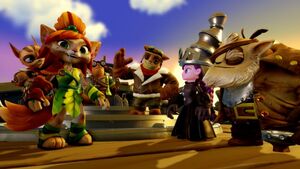 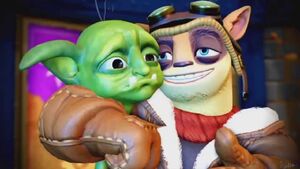 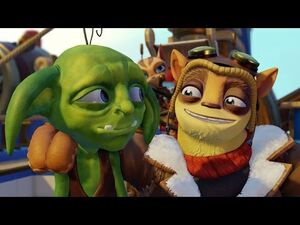