NOTE: This article is about the incarnation of Foggy Nelson from the Marvel Cinematic TV series. The mainstream version can be found here: Foggy Nelson (Marvel).

Stop Wilson Fisk and keep him behind Bars (succeeded)

Franklin "Foggy" Nelson is the tritagonist of the superhero web television series Daredevil, serving as the tritagonist of Season 1, a major charactee in Season 2, and one of the two tritagonists of Season 3 (along with Ray Nadeem). He is one of the two founders of the law firm Nelson & Murdock, along with his best friend Matt Murdock, whom he has known since law school. He worked on cases with a passion for getting justice for the innocent including Karen Page and Elena Cardenas. Nelson remained loyal to Murdock even after discovering that Murdock had been living a secret life as a masked vigilante known as Daredevil.

He is portrayed by Elden Henson.

Foggy is a fun-loving and sociable man when not doing his job but is shown to be professional when the situation demands it even under extremely stressful circumstances. Foggy is shown to not look down on others with disabilities and wants to help the little guy whenever he can. Noticeably Foggy is the more pragmatic of the duo as while he dislikes it he admits he wants to take cases that will actually pay the bills while Matt is more focused on if the person is truly innocent rather then how much they will get paid. While Foggy disagrees with Daredevil due to him being a vigilante he does recognize the figure as beneficial to Hell's Kitchen and it's citizens safety. 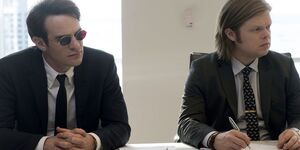