Singing Camptown Races.
Hanging Out with the Girls.

Trick Henery Hawk to think Barnyard Dawg is a chicken

Foghorn Leghorn (simply known as Foghorn) is a major character in the Looney Tunes franchise. He is an animated giant rooster appearing in numerous Warner Bros. cartoons.

He first appeared in 1946 in a Henery Hawk cartoon entitled "Walky Talky Hawky."

Foghorn Leghorn is a giant anthropomorphic rooster with a Virginian accent, a "good ol' boy" speaking style, and a penchant for mischief. He first appeared in 1946 in a Henery Hawk film entitled "Walky Talky Hawky." All of the motion picture Foghorn Leghorn cartoons were directed by Robert McKimson, and the rooster vies with Taz as the most popular character associated with the director. Many of the gimmicks involve Foghorn Leghorn and his archenemy, Barnyard Dawg, engaging in one-upmanship through a series of pranks. Unlike other Looney Tunes rivalries (with the notable exception of Wile E. Coyote and Road Runner series) Foghorn is often the initial aggressor out of self-amusement and subsequently on the "losing" end of gags. It's revealed it the first cartoon where he and Barnyard Dawg first appeared that Dawg is the one who started their unstoppable fight.

Most common among them was Leghorn's taking up a plank of wood, while ambling along humming "Camptown Races" (the only intelligible words being "Doo-dah! Doo-dah!"), coming to the sleeping George P. Dog with his front half inside his doghouse, picking up his tail and rapidly whacking (almost always with eight strokes) his exposed rear end. Occasionally, Foghorn sings the song, but replaces "Camptown ladies sing this song..." with "Lump-teen-dozen and a-doo-dah day...". He does not sing any other part of the song, reverting to humming after the doo-dah's. The dog would give chase, usually with his leash still attached to his collar, until the leash stretched taut and his barking was replaced by an anguished shriek.

At times, when the dog would continue to bark, he would also yell, "Aaaaaahhhhh, shaddap!" In rare cases, it's the dog that starts the series of pranks; as such it is somewhat difficult to tell who started the feud. This gag was passed down to the Leghorns' grandson in Feather Bluster, where Foghorn was puzzled as to why the kid was behaving that way and the Dog was all too happy to remind him: "Ain't nothin' wrong with 'im, Foggy, 'cept that he takes after you." He was joined in a few episodes by a cat called "Bill" who initially attempted to eat him but ended up joining forces to outsmart George P. Dog. Other recurring themes throughout the cartoons included the attempts of the diminutive Henery Hawk to catch and eat Foghorn, and the rooster's efforts to woo the widowed hen Miss Prissy (often by babysitting her bookish son, Egghead, Jr.). Foghorn's voice was created by Mel Blanc and was later performed by Joe Alaskey, Hank Azaria, Bill Farmer, and Jeff Bennett. Later, some of Foghorn's characteristic catch-phrases were drawn from the character of Senator Claghorn, a blustering Southern politician who was a regular character on the Fred Allen radio show.

The rooster adopted many of Claghorn's catch phrases, such as "That's a joke, I say, that's a joke, son." The references to Claghorn were obvious to much of the audience when the Foghorn Leghorn cartoons first premiered, but like many of the references in WB cartoons of the era, they have since become dated. A toddler version of Foghorn made appearances in short music videos of Baby Looney Tunes. He starred in only one episode of the show, in which he was trying to fit in with a gang of cool roosters and employed the help of Tweety and his friends before Lola Bunny suggested to just be himself, which came in handy when Barnyard Dawg chased the cool roosters. A leghorn is a breed of chicken, and foghorn describes the character's loud, overbearing voice. At its most raucous, it sounds similar to that of another Mel Blanc voice: Yosemite Sam (a strictly Isadore Freleng character). Both parts of the name suggest the association with "Senator Claghorn." Foghorn Leghorn made numerous appearances in Tiny Toons Adventures in numerous roles as Acme Loonervesity's Professor of Hound Teasing, Baseball Coach and an obnoxiously loud Librarian. He also appeared in Animaniacs episode "Warner Brothers 65th Anniversary Special" and in Taz-Mania episode "Gone With the Windbag".

The rooster appeared in two Chuck Jones shorts of the 1990s, Superior Duck (1996) and Pullet Surprise (1997), voiced on both occasions by Frank Gorshin. He was part of the Toon Squad team in Space Jam, and was a croupier at Sam's casino in Looney Tunes: Back in Action. In addition, Foghorn appeared in commercials for Jack In The Box, McDonald's, and GEICO commercial. A character named Mr. Leghorn, based on Foghorn himself, made a pair of appearances in Loonatics Unleashed. He also appeared in many New Looney Tunes episodes.

In The Looney Tunes Show, Foghorn is an occasional supporting character and a mentor more than anything.

His voice was created by actor Mel Blanc, heavily patterned after the character of Senator Claghorn, a blustering southern politician who was a regular character on the Fred Allen radio show. Senator Claghorn was created and voiced by radio comedian Kenny Delmar. Foghorn Leghorn also used a number of Claghorn's catch phrases, like "That's a joke, son". The references to Senator Claghorn were obvious to much of the audience when the Foghorn Leghorn cartoons first premiered but like many of the references in WB cartoons of the era they have since become dated and "go over the heads" of most modern-day audiences.

A leghorn is a breed of chicken, and foghorn describes the character's piercing, monotonous voice. 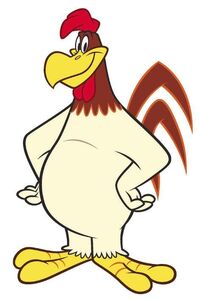 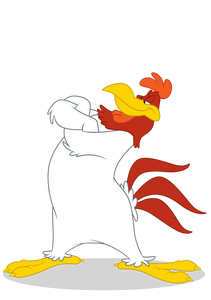 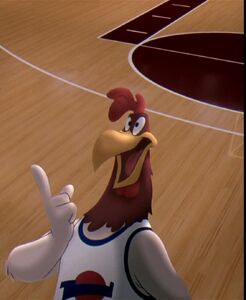 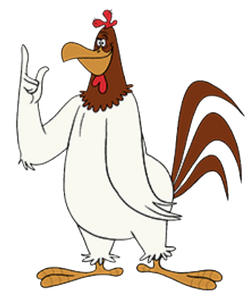 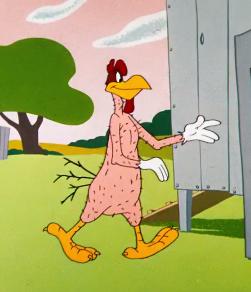 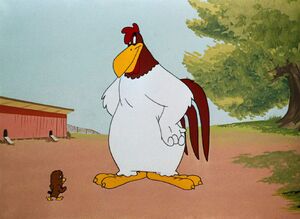 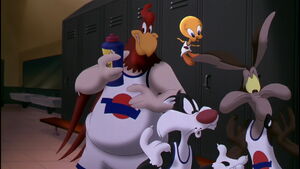 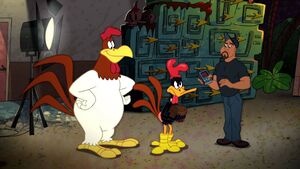 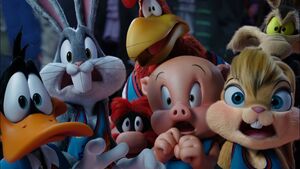 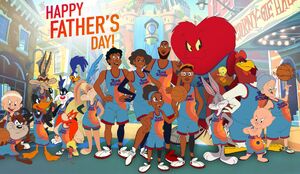