Save his family and Godzilla from the M.U.T.O.s

He is portrayed by Aaron Taylor-Johnson, who also portrayed Quicksilver in the Marvel Cinematic Universe and Kick-Ass in the film series of the same name. CJ Adams also played his younger self.

In 1999, when Ford was a young boy, his mother, Sandra Brody, was killed in the subsequent destruction of the Janjira Nuclear Power Plant leaving only his father Joseph Brody alive.

Fifteen years later, Ford, now a U.S. Navy explosive ordnance disposal officer and father of a family composed of his wife, Elle Brody, and their son, Sam, visited Joe, who convinces him to form a duo to investigate the truth in order to find what caused the incident.

They are quickly arrested by government agents and are present when the winged M.U.T.O. awakens and Ford witnessing the death of his father in the chaos. Ford then reveals to Dr. Ishiro Serizawa and Dr. Vivienne Graham (members of the secretive company, Monarch) that his father had monitored echolocation signals that indicated the winged MUTO was communicating with something (who is later revealed to be a female M.U.T.O. whom the winged M.U.T.O., who is in truth a male, intends to mate).

Ford later joins a team delivering many nuclear warheads (who will serve to lure out and destroy the monsters) by train, but the female M.U.T.O. intercepts the train and devours most of the warheads and Ford is the only survivor of the attack. He is quickly rescued by many military who has comes to recover the last nuclear warhead.

As the female and male M.U.T.O. finally met at San Francisco, the female laid thousands of eggs, and used the last nuclear warhead (whom the male had previously stole from the military) as an energy source for the soon to be offspring, Ford and a bomb disposal squad are then sent in via HALO jump to defuse the bombmen. They removed the nuke, while Godzilla battles the M.U.T.O.s, and Ford also destroyed the eggs.

This inadvertently saved Godzilla (who was overpowered and wounded) as it distracted the M.U.T.O.s who rushed to their nest to find it destroyed, granting Godzilla a reprieve. The female M.U.T.O then noticed Ford and identifying him as the one who destroyed her eggs, attempts to kill him, but Godzilla, having gained his second wind, intervened and returned the favor by incapacitating the female M.U.T.O with his atomic breath twice, knocking her down long enough for Ford to load the bomb onto the boat, and for Godzilla to kill the male before saving Ford's life once again by killing the female with his "kiss of death". With the M.U.T.O.'s EMP ability no longer being in effect, Ford got the boat working, but was too injured to move. Not long afterward, he was saved by a helicopter and was airlifted out as the bomb exploded harmlessly out at sea.

The next day, Ford reunites with his family as they spot Godzilla on the news, seemingly dead from the battle, only to rise up and return to the sea, leaving humanity in peace.

Ford initially found out about Godzilla when Dr. Serizawa and company showed him footage of Monarch 1950s ventures, thinking it was a monster just like the MUTO that had killed his mother years ago and recently took the life of his father. Getting caught in the middle of Godzilla's battle with the male MUTO in Hawaii didn't help his view. However after HALO-jumping into San Francisco in the midst of Godzilla's battle with the MUTO pair to save his family and help disarm a live nuclear warhead, Ford encountered the ancient titan several more times. Deducing Godzilla was the best chance at stopping the MUTOs and that the latter could threaten mankind if they bred, Ford destroyed their nest in a gas explosion. This distracted the MUTOs and drew the ire of the female when she spotted the dazed Ford. This is when Godzilla would inadvertently save Ford's life by firing his atomic breath at the female to knock it out for a time.

Separated from his team and limping to the harbor, Ford would come across Godzilla again after the titan was knocked over from a building falling upon him in the process of killing the male MUTO. Now on eye level with each other, Godzilla and Ford shared a moment of mutual recognition where Ford could clearly deduce the being before him wasn't a mindless monster; but an thinking entity. Godzilla would go on to inadvertently save Ford again from the returned female MUTO, which gave the exhausted Ford the opening he needed to get the loaded warhead out to sea. Both of them collapsed soon after. In the clean-up operation the next day, Ford was reunited with his family and watched Godzilla peacefully go back to the sea, respectful and happy for the titan's efforts.

Ford and Elle have a loving marriage, and Elle encourages Ford to mend about his father.

Ford deeply cares about his son Sam and Ford intends to spend as much time with Sam together upon finishing his latest deployment.

Ford and Joseph's relationship suffers greatly after Sandra's death, with the two getting into minor arguments about the latter's trespassing into Janjira's old areas after the reactor's destruction. Despite this rockiness, he is genuinely horrified when his father is mortally wounded by the male M.U.T.O. freeing itself, and displays intense guilt and sadness over how he treated his father after he succumbs to his wounds and dies.

Ford first meets Serizawa and Vivienne Graham when he picks him and his injured father to come with them to find out what his father knows about the male MUTO. Ford has barley interacted with Serizawa knowing that Godzilla would stop the male and the female MUTO. Ford later gets called in by Serizawa and Graham to explain Godzilla's backstory and history.

Alongside Ishiro Serizawa, Vivienne Graham explains to Ford about the origins and purpose of Monarch. In return, he informs them about the male MUTO's echolocation.

Having a Type A personality, Ford is stoic and generally level-headed, even in stressful situations. However, he ends up breaking his stoic demeanor a few times; namely showing distraught grief when Joseph is mortally injured from the male M.U.T.O. freeing itself, calmly comforting a lost child at the airport when the child is separated from his parents, when he contacts Elle shortly before undertaking the train operation, and lastly when he reunites with her in the aftermath of Godzilla's fight with the M.U.T.O.s. He also is far more jovial and personable when with his family, which only turned off when the stress of reuniting with his estranged father was brought up. This could indicate his stoicism and reserved nature is a coping mechanism to keep focused and away from stressful topics.

Despite these breaks in Ford's generally stoic attitude, he is depicted as being conscious of knowing when and where grieving and emotional outbursts are acceptable and is capable of being ready to shove his personal issues aside in order to pay attention to a greater issue. Ford is also very resourceful, having voluntarily stayed behind as his military comrades push forward with their goal, so he could create a makeshift explosive that would end up destroying the M.U.T.O. nest and inadvertently saving Godzilla's life. 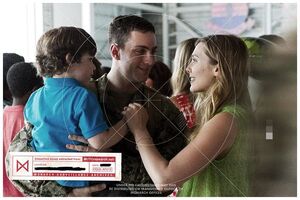 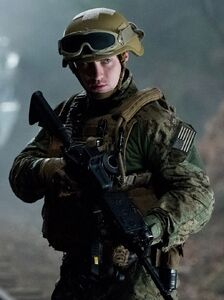