Being played with Bonnie.
Being in the trash (formerly).

Get back to the trash (formerly).

Retrieve Woody's voice box (formerly).
Help Woody and his friends to save Bo Peep (succeeded).
Get back home to Bonnie (succeeded).

The Bensons (all formerly)
Dragon the Cat

Forky is the tritagonist of Toy Story 4. He is a sentient spork created by Bonnie during her kindergarten orientation who is unsure of his role as a toy.

He is voiced by Tony Hale.

Bonnie made Forky out of the things Woody brought to her. He gained sentience from his creation.

He is a spork with pipe cleaner arms, googly eyes, and a broken popsicle stick for feet stuck to him with clay.

Forky is kind and pleasant. However, he is quite naive and unaware of the danger he puts himself through. At the beginning of Toy Story 4, he is certain he is not a toy, but instead belongs in the trash, even going as far as attempting to throw himself out every chance he's given.

This is because the prospect of being alive in the first place made him uncomfortable, being unable to understand his purpose. Even after he starts accepting he was made to make Bonnie happy, he still refers to himself as "Bonnie's trash" until the end, as shown when he tells Karen Beverly about she is a toy instead of "trash".

After his creation, he sprang to life when Woody was with him in the backpack. Woody introduces him to the others, but he believes he is not a toy. While on a family roadtrip, Forky jumps out a window. Woody chases after him, and convinces Forky that he is a toy and he has a new purpose.

While they were walking, Woody sees Bo's lamp in an antique store. When they got inside, they ran into Gabby Gabby and her butler, Benson.

Forky then is captured by Gabby, while she tells him her tragic story. Forky however, tells Gabby, that Woody will help.

At the end of the film, however, while Woody goes with Bo, Forky stays with Bonnie, and the other toys, and says goodbye to Woody.

Forky asks a question in each of the ten episodes. 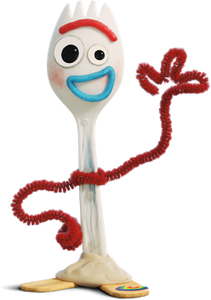 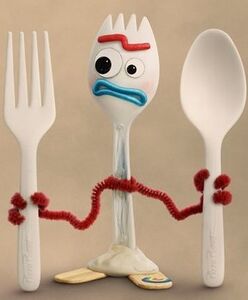