Heroes Wiki
Register
Don't have an account?
Sign In
Advertisement
in: Candidate for Deletion, Ben 10 Heroes, Aliens,
and 21 more

Four Arms is an alien ego of Ben Tennyson from the Ben 10 Media. He is the Omnitrix's DNA sample of a Tetramand from the planet Khoros.

Four Arms is a four-armed red humanoid alien with four yellow eyes, red spikes on his four muscle arms, three fingers and a thumb on ease hand, and two toes on ease foot. He also has a black stripe goes from his chin to his lower lip. Four Arms wear a white T-shirt with a black line going down it, He also wears black pants and black fingerless gloves. Four Arms wears the Omnitrix Symbol on his upper left shoulder.

Four Arms reappeared in "Ben 10: Ultimate Alien", having an wrestler-like appearance. He now has golden bracelets, a ponytail, two gold sashes that cross over his trunk with the Ultimatrix symbol on the center of his chest, and green eyes instead of yellow.

In "Ben 10: Omniverse", 16-year-old and 11-year-old Four Arms' design resembles a moustached muscle man at a circus, and the Omnitrix symbol is located in his belt.

In The Big Tick, Ben transforms into Four Arms to break the Great One's shell, but Four Arms have no effect on the shell, Four Arms was then knock back by the Great One.

Four Arms returns in Video Games, Ben was suprise when transformed into Four Arms because he never thought that Four Arms was still in the Ultimatrix, SSSerpent used his two mouths (for hands) to attack, but only for Four Arms to grab them with his lower arms and hold SSSerpent in place, thus used his upper arms to pick up and slam two cars into SSSerpent to defeat to cobra-like alien. 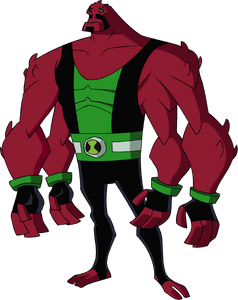 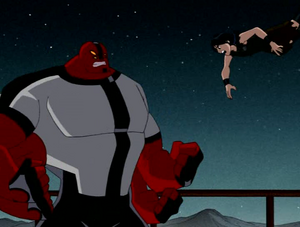 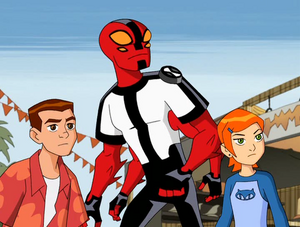 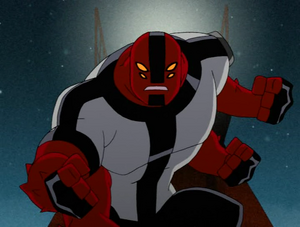 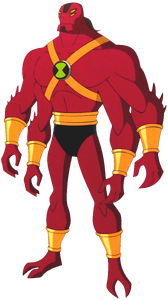