Heroes Wiki
Register
Don't have an account?
Sign In
Advertisement
in: Outdated Articles, Article stubs, Partners in Training,
and 22 more

The Legend of Zelda: Four Swords

Competing against each other.

In some Zelda games such as Four Swords, Four Swords Adventures, and The Minish Cap, Link is able to split into four versions of himself, thus creating a team of Four Links.

The series has used the team of Links for games that include multiplayer, with the exception of The Minish Cap, which is a single player adventure like the rest of the series.

The Four Links had a color of their clothes like, Green, Red, Blue and Purple which the Link splits into more than one of himself, thus Links. Green Link is the original Link that grabs the Four Swords which causes him to split more than one with different colors.

They are voiced by Fujiko Takimoto (who also voiced Young Link) and currently by Sachi Matsumoto. The Four Links are also called the Four Toon Links by fans in the appearances of the game which include Game Boy Advance and Nintendo Gamecube, as well in Nintendo Wii respectively. 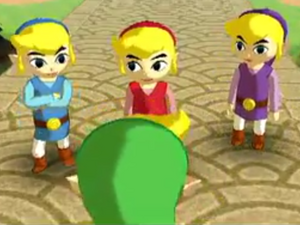