Fowler is a grayish-blue-colored old rooster and the tritagonist of the 2000 film Chicken Run and will be a character in the upcoming 2022 Netflix sequel Chicken Run: Dawn of the Nugget.

He was the only rooster in Ginger's team before Rocky's arrival. He is the short-tempered member of the Royal Air Force (RAF). He is the "kapo" of Tweedy's Chicken Farm.

He was voiced by the late Benjamin Whitrow in the first film and will be voiced by David Bradley in the sequel.

Fowler is the firm but fair cock of the walk. He enjoys reminiscing of his days in the RAF. He is a wise, tough-as-nails, knowledgeable, old rooster, who maintains order and discipline in the coop. He is also fatherly toward Ginger.

He is stern, assertive, cantankerous, and a little rough around the edges, but genuinely cares about his charge, and has a good heart, though it is hidden under his bad breath, bloodshot eyes, and generally gruff exterior.

When Fowler first met Rocky, he showed a high level of jingoism and called Rocky a "yank". He especially hated having to share his bunk with him, a feeling that Rocky shared. But after Rocky saved Ginger from the pie machine, Fowler started to respect him and even let him take the entire bunk.

Ginger entrusted Fowler to fly the plane that took the Chickens out of the farm. Fowler was initially reluctant, but upon encouragement from Ginger and Bunty, he agreed. Everyone has assumed he was a pilot, when he was simply a mascot. 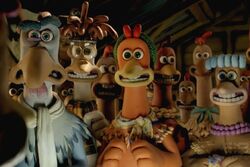 Fowler with Ginger, Babs, Mac and their flock