The Fastest Fur in the West

Be famous in the comedy game

Fozzie Bear is an important Muppet character and one of the main characters of the franchise.

The show's stand up comedian, Fozzie tries his best to be the funniest possible, but his jokes often fail because of Statler and Waldorf mocking him. He is very insecure about his comical talent.

Fozzie is best friends with Kermit and Gonzo.

Since the early days of The Muppet Show, Fozzie has often interacted with Kermit. Fozzie got Kermit to reluctantly assist him for one of his best-known monologues, "Good Grief! The Comedian's a Bear!", and has also had quite a bit of interaction with Kermit backstage.

In episode 115, Fozzie constantly annoyed Kermit with a running gag, delivering a number of pun items, such as a "wire" and a "letter" for Kermit the Frog which turned out to be a clothes wire and the letter R, respectively.

In episode 114, Fozzie performed the supposedly famous "Banana Sketch." When Kermit confessed that he didn't know what "The Banana Sketch" was, the cast and guest star Sandy Duncan teased him for his ignorance.

Kermit and Fozzie have also frequently been paired together in countless movies, books, and specials. In The Muppet Movie, Fozzie was the first Muppet Kermit met on his journey. After Fozzie's unsuccessful comedy performance at the El Sleezo Cafe, Kermit invited Fozzie to come to Hollywood with him. The two friends sang the duet "Movin' Right Along" in the same film.

Fozzie was also frequently teamed up with Rowlf, beginning in episode 101 of The Muppet Show, in which Fozzie played a bandit opposite Rowlf's saloon piano playing hero in the Western sketch "Cowboy Time." Fozzie also appeared as a patient in two Veterinarian's Hospital sketches, in which Rowlf starred as Dr. Bob.

In episode 218, Rowlf learned that Fozzie could play the piano (a talent Fozzie didn't know he had, either), and they played a duet of "English Country Garden." Rowlf has also played back-up to Fozzie's renditions of "Hi-Diddle-Dee-Dee (An Actor's Life for Me)" and "I Got Rhythm." During the latter number, Rowlf attempted to help Fozzie with his singing.

The young incarnations of Fozzie and Rowlf were also frequently paired together on Muppet Babies.

Fozzie's agent, introduced in episode 122 of The Muppet Show, is Irving Bizarre, who is so short that his top hat covers most of his body. Fozzie also has a hired writer, Gags Beasley, who was first mentioned in Episode 114. Fozzie and Gags have a deal, whereby Fozzie pays his writer by the laugh.

Although Fozzie's main job on The Muppet Show is to be the stand-up comedian, he takes on the occasional dramatic role and often assists backstage. He appears in sketches with guest stars Avery Schreiber and Nancy Walker, and he also appears in the recurring sketch Bear on Patrol.

In episode 201, Kermit let Fozzie help plan the show. His abilities in doing so earned him the title of "Honorary Hip Dude" from the Electric Mayhem band. Sadly, his planning also later lost him that title. Then, when Kermit becomes sick in episode 206, Fozzie is put in charge of hosting the show, which proves quite taxing for the bear.

Fozzie had also made an attempt to write for the show in episode 314 when he decided that the show needed a script. Unfortunately, Fozzie is either a bad speller or a bad typist (or both), as Kermit found it difficult to read the introductions that Fozzie wrote for him. Fozzie later admitted that he was a bad speller when he wrote the word "Muffets" as part of the title card for The Muppets Go to the Movies. 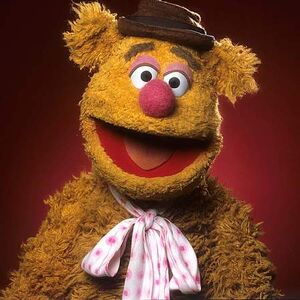 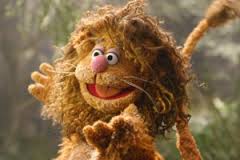 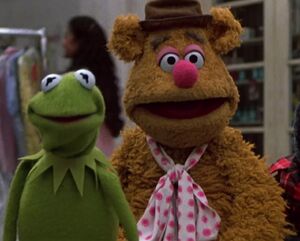 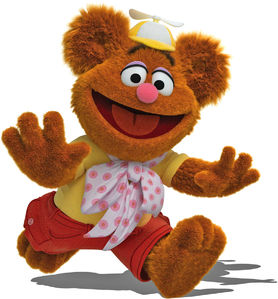 Retrieved from "https://hero.fandom.com/wiki/Fozzie_Bear?oldid=1675172"
Community content is available under CC-BY-SA unless otherwise noted.