Frances Goldsmith is the main deuteragonist and one of the key heroines in the novel The Stand, with a great deal of the story being narrated from her point of view.

Fran was the daughter of Peter and Carla Goldsmith of Ogunquit, Maine Ogunquit. She once had an older brother, but when she was four and Fred was thirteen, he was killed by a drunk driver.

Warm, spirited, and often tomboyish, Fran is stated by Peter to have a personality very much like Carla's. This notion strains Fran's credulity, as after Fred's death her mother shut down emotionally, becoming cold and distant: obsessed with her spotless parlor, her involvement with church and town activities, and the importance of keeping up outward appearances — "a real Ogunquit Snob." Her relationship with Fran is antagonistic, and she seems to enjoy being mean to her for improper or unladylike behavior.

By contrast Fran is very close to her laid-back, earthy father. Her happiest childhood memories were of spending time with Peter in his workshop or his garden, talking or listening to his gentle wisdom while he worked.

On the eve of the superflu outbreak, Fran is a twenty-one year old college student. She finds herself pregnant by her boyfriend Jesse Rider; while Fran intends to keep the baby, she cannot bring herself to contemplate marriage to Jess, as she considers him "weak", and ultimately realizes she does not love him.

Peter reacts stoically to the news of the unplanned pregnancy, but Carla nearly has an apoplectic fit, convinced that this scandal will destroy her reputation in town. After she mercilessly berates Fran, Peter uncharacteristically intervenes and lays down the law, even slapping his wife when her hysterics get out of hand.

Within 48 hours of this ugly family dustup, the superflu comes to Ogunquit and Carla is one of its first victims. Her condition quickly worsens, and as the disease spreads rapidly through town (with barricades and martial law enacted), she dies in the hospital. Fran takes it very personally, feeling as if their argument had weakened Carla's constitution, and regretting that they did not make peace before the end.

Peter takes to his own bed ill, refusing treatment at the hospital, and dies the following day; Fran takes on the responsibility of enshrouding her father and giving him a proper burial in his garden.

Shortly, Fran and Harold Lauder are the only plague-survivors in Ogunquit. Harold is the brother of Fran's best friend Amy; five years Fran's junior, he is overweight, unhygienic and unpopular. While brilliant and resourceful in his own way, and a dedicated writer, Harold is also immature and nerdy and lacks social skills you know. He often compensates for his low self-esteem by "acting out" in pompous, rude ways.

Still, Fran takes compassion on Harold: partially because he is so alone and vulnerable, partially because he really is trying to "man up" and rise to the challenge of living in a post-plague world. Together they set out for the Stovington Plague Center in hopes that others have survived the superflu epidemic.

Near Twin Mountain, New Hampshire, Fran and Harold encounter Stu Redman. Harold is immediately distrustful and rude; Fran berates him for his irrational hostility. In a firm sidebar with Harold, Stu bluntly asks whether he is sleeping with Fran. He is not, but Harold has become infatuated with her and now views Fran as his de facto girlfriend. Stu promises to not "squeeze him out", he just wants to join them in looking for survivors.

The three of them double back to Woodsville to pick up Glen Bateman and head to Stovington, but just as Stu had warned, everyone there is dead. When the group realizes they are sharing the same dreams of Mother Abagail and nightmares about Randall Flagg, their destination shifts to Hemingford Home, Nebraska. They also agree to begin taking a sedative at night, so they can all sleep dreamlessly.

Fran has not told anyone in the group, now numbering six and growing, about her pregnancy; unsure of what the sedatives will do to the fetus, she quietly refuses her nightly pill. She begins keeping a diary of post-plague events for the baby's sake: chronicling their daily travels, new companions, deaths along the way, pop culture references from the pre-plague world — and the escalating tensions between Harold and Stu.

Her romantic feelings for Stu Fran has also kept secret, except in her diary. When Dayna Jurgens joins their group Fran sees her as a potential rival, especially after Dayna and Stu show signs of warming up to one another — a fact smugly, though silently, noted by Harold. Emboldened, he makes an open bid for Fran's affections and is turned down flat.

This prompts Fran to stop vacillating and finally reach out to Stu. They make love, confess their mutual feelings for one another, and make love again, unaware that Harold has been spying upon their tryst.  That night while Fran is sleeping, Harold steals and reads her diary. In it Fran has lambasted Harold's character, conduct, and even his hygiene. Faced with the truth that Fran was never attainable in the first place, Harold begins to hate her as much as Stu. Starting his own diary — referred to as his LEDGER — Harold fantasizes about killing them both.

The group changes its destination to the Boulder Free Zone; upon arrival Fran and Stu move into a third-floor apartment at Pearl and Broadway. They are both tapped for Boulder's ad hoc committee, then formally elected to the more permanent Boulder Free Zone Committee, along with Nick Andros, Larry Underwood, Ralph Brentner, Glen Bateman and Susan Stern.

Fran acts as the committee's secretary, taking minutes at meetings, and frequently serves as its moral compass when the group ponders taking actions that are ethically dubious in nature.

That September Fran is nearly assassinated by Harold's dynamite bomb, which kills Nick and Susan, maims Ralph, and kills and wounds a number of other Zoners; however, she is merely injured and does not lose the baby. Even though a dying Mother Abagail miraculously heals her injuries, Fran is told to remain behind when the other four surviving Committee members are ordered to go to Las Vegas, Nevada and confront Flagg.

Adamantly and bitterly opposed to Stu going on this suicide mission, Fran experiences near hysterics when he insists he has no choice. Resigned, she finally lets him go, after forcing him to swear on a patch of Nick's blood that he will return. Fran goes into labor shortly after New Year's Day, as Stu is still making his way back to Boulder with Tom Cullen and Kojak. The male baby, named Peter after his grandfather, is a breech birth and must be delivered by Caesarian. He also turns out to have the superflu.

However, Peter has inherited partial immunity from Fran; shortly after Stu's return, the baby manages to outlast the virus and survives. He is the first living post-plague child born to the Free Zone.

That spring Fran expresses homesickness and a desire to return to New England. Stu concurs that things are becoming uneasy in the Free Zone; the increasing size of the population has led to the resurrection of old social ills like politics, an armed police force, and people feeling the need to lock their doors at night. He and Fran take Peter and head back east — with Fran again pregnant, this time carrying Stu's child. 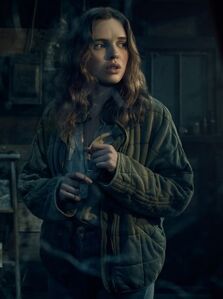 Odessa Young as Fran in the 2020 miniseries.