To become a circus star

To help Flik fight off the grasshoppers (succeeded)

Francis is a ladybug from Pixar's 2nd full-length animated feature film, A Bug's Life. He is a Drag Queen in the circus, but unfortunately the effect is so convincing that people are always mistaking him for a real girl. He was the ladybug. He, Heimlich and Slim are P.T. Flea's clowns, and despite P.T. treating Slim like dirt, Francis has mixed feelings ("Hey! I heard that, you twig!") and they have somewhat of a friendship.

He was voiced by Denis Leary, who would later voice Diego in the Ice Age films and Captain George Stacy from The Amazing Spider-Man films.

﻿Francis is a drag queen in the circus. Unfortunately, the effect is so convincing that insects are always mistaking him for a real girl. He is very quarrelsome, short-tempered, cantankerous, and aggressive, and it doesn't help that he is constantly being mistaken for a girl just because he is a ladybug. He is great friends with Slim and Heimlich, who try to keep him calm. He also carries Slim when the circus troupe fly.

Francis is an aggressive ladybug and a clown in P.T. Flea's circus troupe. Francis is fed up of constantly being mistaken for a girl and even picks a fight with a couple of audience members during a performance when they attempted to woo him, unaware of his actual gender.

Francis' aggressive nature makes others cry, particularly maggots and, later, little ants when he becomes a "den mother" to the Blueberry troops. Apparently, he was a natural mother according to Dr. Flora. Francis seems to have a strong friendship with Slim and Heimlich. While transporting over long distances, Francis has to carry Slim, who, despite being a stick insect, doesn't have wings and cannot fly.

When a bird attacks the insects, Francis sees Dot falling and rushes to catch her, but they fall into a huge gap in a canyon, where a large rock crushes Francis' leg. Because of his efforts, Dot and the Blueberries make Francis their "den mother." This annoys Francis at first, but he eventually warms up to the Blueberries while his broken leg heals. When P.T. Flea arrives on the island, Francis serves as an indirect catalyst for Flik's banishment, as he spills the beans that the idea of a makeshift bird was invented by Flik.

Much later, when Hopper takes Flik hostage, the circus bugs give chase. Francis loses grip of Slim while flying through a tree and is unable to locate him in the branches.

At the end of the film, when the circus troupe is about to leave, Dot and the Blueberries are seen crying as they hug Francis. Francis also helps Manny carry Heimlich since Dim is carrying the circus wagon. 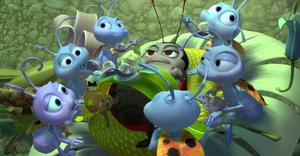