Mechanically Modified
In-Love
Nurturer
Francoise Arnoul aka Cyborg 003 is the third member of the 00 Cyborgs and a major protagonist in the Cyborg 009 franchise created by Shotaro Ishinomori, as well as the love interest of Cyborg 009. In contrast to her youthful appearance, Francoise is close to 60 years old, being one of "first generation cyborgs".

Born in Paris, France, from a young age Francoise aspired to be a ballet dancer. Her dream was achieved when she was accepted into a professional ballet school and at 19 won a dancing contest there. However, she was kidnapped soon after she left the school by the Black Ghost war profiteering organization. Taken to one of their laboratories, Francoise was converted into the third model of their 00 Cyborg line, being given visuals enhancements that granted her the ability to detect sights from far away, as well as enhancements to her hearing that greatly increased her ability to pick up on smaller and farther away sounds.

Alongside the other 00 Cyborgs, 003 escaped with help from ex-Black Ghost scientist Dr. Gilmore. 003 and her fellow cyborgs soon began a campaign to foil Black Ghost's schemes of triggering another world war and put an end to the nefarious organization. 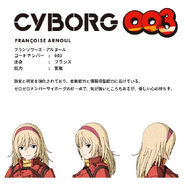 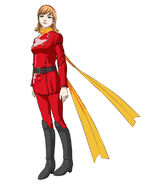 Add a photo to this gallery
Retrieved from "https://hero.fandom.com/wiki/Francoise_Arnoul?oldid=1755068"
Community content is available under CC-BY-SA unless otherwise noted.