Frank Harris is the deuteragonist of the 1992 film Cool World. He is a police detective in Cool World and a Second World War veteran from the Noid World, who is bent on catching Holli Would.

Frank was formally a soldier who first appears coming home from World War II to meet up with his mother. He and his mom go on a motorcycle ride when they both crash into a drunk driver and his girlfriend, killing his mother. Devastated, Frank screams out loud and is transported to the Cool World, an animated cartoon world by Dr. Vincent Whiskers or Vegas Vinnie who used the Spike of Power. Frank stayed in the Cool World for 47 years, becoming a detective. During that time that it was 'made' by Jack Deebs.

Frank goes to Holli Would's place to remind her again not to mess with any noids and refuses her advanaces on him because of the Cool World's rule: Noids (Live Action humans) don't have sex with doodles (Cartoons). He and his partner Nails go investigate some more and find Jack Deebs in the world of the Cool World with Holli. He pulls him over to him and explains to Jack the rule and warns him not to be too close to Holli before leaving. Frank meets up with his girlfriend Lonette, who is a doodle. Frank tells Lonette about how he's doing and investigates on Holli again and warns her to stay away from Jack. Frank goes to meet up with Lonette and orders Nails to call if any problems.

He meets up with Lonette at a bar and they mend their relationship. However, he gets the news from Sparks, Holli's ex-boyfriend that Jack and Holli made it and Holli has been turned into a human and that Nails has been sucked into Holli's pen. Enraged, Frank goes to the real world after telling Lonette he'll be back for her. Frank confronts Jack at his house about the situation and Jack explains that Holli's going to the Las Vegas Casino to find the Spike of Power. Frank, Jack and Jennifer, Jack's neighbor drive there and they meet up with Dr. Whiskers who has been blown up by Holli and he explains that if Holli reaches the top, the Cool World and the Human World will be destroyed. Frank follows Holli to the building and she begs him to save her. He takes her offer, but it's too late and Holli kills Frank by pushing him off the building. After Jack puts the Spike back which sucks him, Holli and everything Holli did back into the Cool World, his corpse is taken by Nails to a crying Lonette. Lonette realizes that Holli was a doodle when she killed him and when noids are killed by a doodle they become a doodle themselves to which Frank comes back as a doodle allowing him to continue his relationship with Lonette. 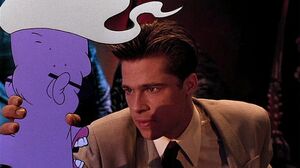 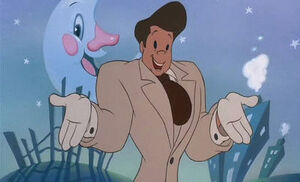 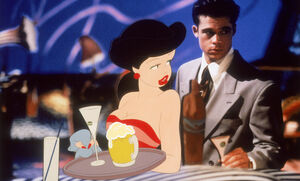 Frank with his girlfriend, Lonette.