To get the story of a lifetime.

Frank West is one of the main protagonists in the Dead Rising franchise. He serves as the main hero in various entries in the series, and appeared in the 2015 live action spin-off film Dead Rising: Watchtower, as well as various crossover games such as Ultimate Marvel vs. Capcom 3, Marvel vs. Capcom: Infinite and Project X Zone.

Frank is a freelance photojournalist, and can be hellbent on breaking the next big scoop, but despite that characteristic, he can show to care for other people, which is most notably seen with Isabela Keyes.

Frank is the protagonist of Dead Rising, and is a photojournalist. He is first seen in a helicopter taking pictures of Willamette. He tells the chopper driver, Ed DeLuca, to drop him off at the mall and pick him up in three days. He gets off on the rooftop and heads down to the mall.

After a walk, Frank finds out that they're barricading the mall because of zombies, when an old lady asks him if he's seen her dog. She then sees her dog at the entrance surrounded by zombies; she takes down all the barriers, lets the zombies in, and is killed by them. Frank escapes and heads to a safe place into the mall. He meets with Jessie, Brad, and Otis. Frank later goes to find out what is happening, after recieving a walkie-talkie from Otis.

He meets with a woman named Isabela Keyes, who is the sister of the man who brought the zombies to Willamette to get revenge for a government experiment. After the three days, Frank goes to the rooftop where he started, and sees DeLuca in a helicopter, but the chopper crashes; Ed is killed by a zombie that had sneaked into the chopper.

Frank then falls on his knees in despair and stays there until Isabela kills the zombies trying to get him. Frank then realizes he has became infected and, at Isabela's request, gathers ingredients to make a prototype of Zombrex (a drug that stops zombification). After that, Frank fights off a Special Forces leader named Brock Mason, and he and Isabela escape Willamette.

Frank West returns in Dead Rising 2: Case West and serves as the deuteragonist of the game. He serves as Chuck Greene's partner and player 2's character in co-op. Frank is first seen in the beginning of the game where he hits the zombified TK with a baseball bat before he could kill Chuck. Frank helps him up then drops him saying that he's the one who started the outbreak in Fortune City. Chuck tells him that he didn't do it and was framed for it. They head back to the roof of the Yucatan casino, only to see that the helicopter has already left.

Frank and Chuck then go to the Phenotrans facility to clear Chuck's name and get Frank the big story. They go through different places and fight zombies in the facility while trying to get their objectives done with. They head to a chamber and meet with Isabela Keyes. Marion Mallon then speaks over a microphone. Guards are sent in and capture Isabela. Chuck and Frank fight off the rest of the guards and kill the guards' commander. The building goes to self-destruct mode and the two escape before it explodes. They look at the destroyed facility and then leave.

Frank West returns as the main and playable protagonist in this "what if" story of Dead Rising 2. He replaces Chuck Greene, though Chuck still appears as a psychopath replacing Leon Bell in the game. In the story of the game, Frank became popular and famous after he exposed what had happened in Willamete, but later on, he was convicted of a scandal. He got bankrupt and became a fallen hero. He later, became a contestant of the game show Terror is Reality.

During that night, Fortune City was under a zombie outbreak; Frank goes to the safe house meets with Raymond Sullivan and Stacey Forsythe. He goes to the Fortune City hotel and meets with Rebecca Chang. He soon discovers that TK was involved in the outbreak and then finds out Stacey was too. He defeats both of them, then he and Rebecca leave and, just like the of the original Dead Rising 2, a zombie's face pops too scare the player. (Note: Rebecca dose not die in Off the Record.)

Ichiro makes an appearance in Project X Zone. He is a playable character with his partner Hsien-Ko.

A world-renowned freelance journalist. Always on the trail of a scoop, his sense of curiosity and adventure has often propelled him into dangerous situations. One day, seeking the scoop of a lifetime, he arrived in the small suburban town of Willamette, Colorado, to be faced by a horde of zombies. With the physical strength developed from his time covering wars and a variety of weapons scrounged up on-site, he defeated the zombies and led survivors to safety, while at the same time exposing the truth behind the outbreak. Having come back alive from hell itself, he published his articles for all the world to see, making a name as a unique and brave hero.

Frank has feelings for others but mostly cares about getting the big story. 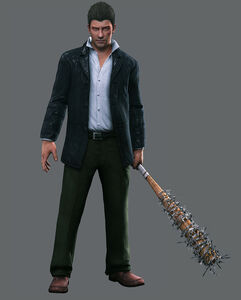 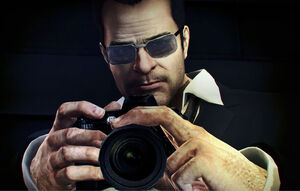 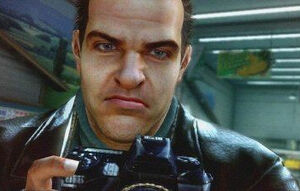 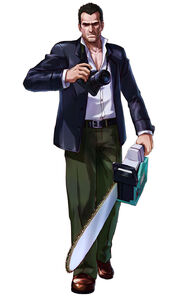 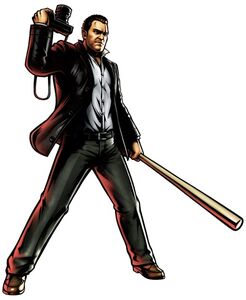 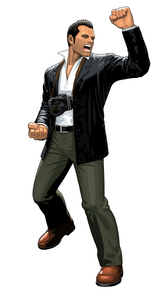 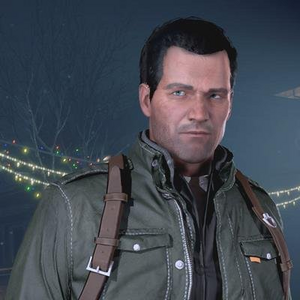 Frank West in Marvel VS Capcom: Infinite
Add a photo to this gallery

Retrieved from "https://hero.fandom.com/wiki/Frank_West?oldid=2241782"
Community content is available under CC-BY-SA unless otherwise noted.