Defeat Gaia and the Giants (succeeded).

Frank Zhang, also known as Fai Zhang, is one of the main characters in The Heroes of Olympus book series. He is a camper at Camp Jupiter, a camp for Roman demigods and is the son of Mars, the Roman God of War and the late Emily Zhang and the Roman half-brother of Clarisse La Rue (the daughter of Mars's Greek form Ares).

He also has Greek heritage, as he is a descendant of Poseidon, the Greek God of the Sea and because of this he can shape shift into animals, so he is also a distant relative of Percy Jackson.

Frank Zhang was born in Canada on June 5, 1994 to military solider Emily Zhang, and the Roman god of war Mars, and is the half-sibling to Clarisse La Rue, the daughter of Mars' Greek form Ares. On his mother side, he is a descent of Periclymenus, who is the grandson of the Greek god Poseidon, making him a legacy of the sea god, and distant relatives to Poseidon's children, which includes Triton, Percy Jackson and Tyson.

Frank's family was blessed by the god with the power to shift into any kind of animal, mythical or living from their human form. Frank is considered a dangerous demigod, due to his ancestral gift combined with his divine lineage. At the night of his birth, Juno appeared to his family and pointed out a piece of timber, warning that if it burned entirely, he would die. Due to his father being absent, Frank was raised by his grandmother after his mother died in a military accident in Afghanistan.

At his mother's funeral, his grandmother told him of their family history and that he is son of a Roman god, and explained that his life force was tied to the timber that she gave him. His grandmother also told him to keep the piece of wood safe, and told him that he would leaving to go to Camp Jupiter. Lupa and her wolf pack arrived at the Zhang's mansion, and Frank went through the process of proving his strength at The Wolf House. Frank arrived at the camp a month after Jason Grace disappeared, and was on Probatio when Percy Jackson arrived.

When Frank arrived to the camp, his grandmother instructed him to go the Praetor and tell her that his great-grandfather was Shen Lun. Shen Lun had created an earthquake accidently that almost destroyed Camp Jupiter, thus Frank's grandmother told him to be for forgiveness to the Praetor. Frank went to Reyna Avila Ramirez-Arellano, and she told them she judged people by their merits, but warned him not to mention Shen Lun to the other campers, as they would be less understanding.

In the The Son of Neptune, Frank is one of the main characters along with Percy Jackson and Hazel Levesque.

In The Mark of Athena, Frank is a main character. One of the seven demigods from the prophecy.

In The House of Hades, Frank transforms from a big burly, panda bear like kid, to a firm, tall, changed man. 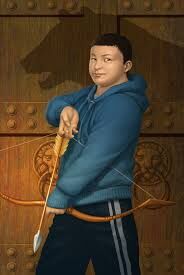